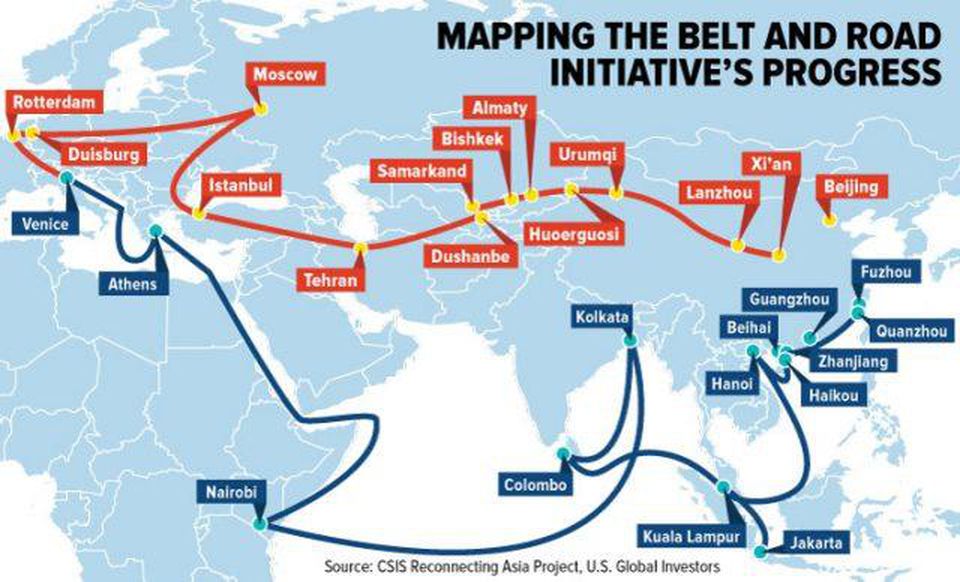 Beijing is currently holding a forum for its Belt and Road Initiative (BRI), which has been beset with concerns over the potential use of debt traps, political and military influence, and the risk of cyber-espionage. Earlier this month, the Center for a New American Security released a report highlighting associated risks of BRI participation, which included lack of transparency, unsustainable financial burdens, corruption, and negative environmental impacts. Xi addressed these concerns in a speech to the forum yesterday, claiming China would uphold international standards. Hannah Ryder, CEO of Development Reimagined, has since recapped the speech in a Bloomberg video interview. For The New York Times, Jane Perlez recaps how Xi retooled the initiative to be more palatable for a global audience, and how international pushback has birthed an anti-corruption campaign:

He stressed the importance of “high quality” and “reasonably priced” infrastructure as the way to help developing countries and said China would follow international rules on bidding and procurement for projects. In an apparent nod to past mistakes, Mr. Xi said: “Everything should be done in a transparent way, and we should have zero tolerance for corruption.”

To show it’s a more responsible player, China is promising corruption-free, environmentally conscious ventures. It is also seeking advice from major multinational banks, asking other countries, such as Japan, to collaborate, and in some cases scaling back its projects.

[…] The head of China’s Asian Infrastructure and Investment Bank, which helps finance projects around the world, told a seminar of Chinese contractors on Monday that they needed to improve their business practices.

[…] “As Chinese contractors, I urge you not to be involved in any corruption, even if you have to give up some projects,” the head of the bank, Jin Liqun, said. People in other countries are “still doubtful” about the Belt and Road Initiative, he said. “As long as we assure quality, they will welcome the projects.” [Source]

Europe, which has raised concerns over increasing Chinese ownership in critical infrastructure and equity in foreign firms, recently found itself divided over how to address China after Italy became the first G7 nation to sign on to the initiative. While German Foreign Minister Heiko Maas said “ultimately we all benefit if we stay united against China,” German Economy Minister Peter Altmaier said earlier today that major EU nations wish to sign a joint MOU on BRI. For Reuters, Tom Daly reports:

[…] Altmaier said Germany, France, Spain and the United Kingdom had shown at the Belt and Road Forum in Beijing on Friday that the EU was “in its great majority” united in its belief that “we can only implement our positions together.”

“In the big EU states we have agreed that we don’t want to sign any bilateral memorandums but together make necessary arrangements between the greater European Economic Area and the economic area of Greater China,” Altmaier said when asked if he could see Germany signing a similar bilateral agreement to Italy.

The minister said he was encouraged by Chinese President Xi Jinping’s pledge to pursue free trade, multilateralism and sustainability as part of Belt and Road.

“We will take this promise seriously” and make suggestions on how to achieve these goals in both Asia and Europe, he said. [Source]

At the Beijing summit, Reuters’ Brenda Goh reports that British finance minister Philip Hammond also lent the U.K.’s support to the initiative, marking signs that it may deepen ties with Beijing:

Speaking at a summit in Beijing on China’s program to re-create the old Silk Road joining China with Asia and Europe, Hammond said the BRI must work for everyone for it to turn into a sustainable reality and he offered British expertise in project financing.

[…] To unlock that private finance and reassure investors, a recognized infrastructure asset class for Belt and Road projects must be created, with standardized contract terms and dutiful reporting that global investors will recognize and trust, Hammond told the summit.

To support the sheer scale of the initiative, private finance will need to play a bigger role in the infrastructure projects, he added.

“Our offer is to bring together the best of Chinese manufacturing, engineering and construction, with the best of British project design and legal, technical and financial services expertise, as we promise the golden era of U.K.-China relations to deliver world class sustainable infrastructure for the 21st century,” he said. [Source]

For more on how the BRI will affect Europe, listen to NPR’s Morning Edition episode on the topic.

Putin told three-dozen leaders gathered for the conference that the Belt and Road is “intended to strengthen the creative cooperation of the states of Eurasia.”

“And it fits perfectly into our plans,” he added.

Putin was referring to the Eurasian Economic Union, which groups Russia with Armenia, Belarus, Kazakhstan and Kyrgyzstan in a common market that seeks to remove barriers to the free movement of goods, services, capital and labor.

The five member states “unanimously supported the idea of linking the construction of the Eurasian Economic Community” and the Belt and Road, Putin said. [Source]

In Malaysia, Prime Minister Mahathir Mohamad cited debt sustainability in announcing plans to defer or cancel approximately $22 billion worth of Chinese-backed infrastructure projects. However, earlier this month, Mahathir approved a pared down version of the East Coast Rail Link project. He also heralded the creation of an AI hub with Chinese unicorn SenseTime, demonstrating a potential shift in BRI strategy. Summer Wang and Tripti Lahiri report for Quartz:

[…] The $1 billion park, which is supposed to help local tech businesses develop robots and speech recognition, and foster tech talent, will be built by an engineering contractor whose parent is building the railway.

High-tech investment often doesn’t involve large sums or major loans, unlike many past projects of president Xi Jinping’s signature foreign policy plan. The AI park is a hybrid, notes Ngeow Chow Bing, deputy director at the University of Malaya’s Institute of China Studies, adding that the deal with SenseTime, in which China offers a “package” of technology transfer and infrastructure construction, might indicate a new BRI strategy.

“The Chinese advances in technologies such as AI, big data and robotics, are the things that the Malaysian government has always been interested in. And [it] hopes China will commit more of this kind of investment,” said Ngeow.

[…] The AI park, which will be built over five years, will see China’s SenseTime partner with G3 Global, a Malaysian manufacturer of jeans that is now developing an artificial-intelligence business, the two firms said in a statement. China Harbor Engineering, a subsidiary of China Communications Construction, which is building the railway, will construct it.

[…] The two companies will also develop technology for national security, surveillance, immigration, and border security. SenseTime, valued at more than $4.5 billion, is well-known for its cooperation with Chinese police on facial-recognition surveillance. It declined to elaborate beyond the statement on the Malaysian partnership. [Source]

For more on the summit, read U.N. secretary general António Guterres’ remarks to the forum. See also CNN’s coverage of which 37 countries chose to attend, and which chose to be conspicuously absent.