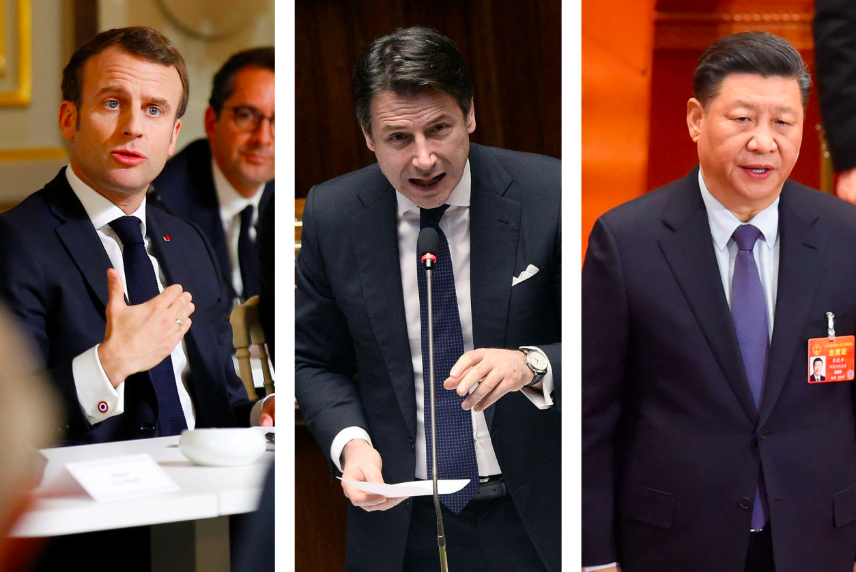 Chinese President Xi Jinping is set to visit Europe on Thursday for a six-day trip to Italy, Monaco, and France. As Xi looks to strengthen ties with individual countries in the region and expand his signature Belt and Road Initiative (BRI), members of the European Union are showing sharp divisions in their stance towards China. The Wall Street Journal’s Marcus Walker reports that France and Germany are preaching caution as the two countries lead the shift towards a more guarded approach to Beijing, while Italy and others welcome greater economic cooperation with China:

The divisions run between and within countries: Some Europeans see China mainly as a business opportunity, others as a would-be hegemon that wants to reshape the international order. In addition, Europe’s free traders are suspicious of Franco-German proposals for economic protections against China, which they fear could reduce the EU’s broader commitment to open, competitive markets—a stance that is already losing a key advocate as the U.K. stumbles toward an EU exit.

Europe’s quest for a coherent approach comes as the region finds itself squeezed by the growing rivalry between China and the U.S. While Beijing is cultivating relationships with individual countries, particularly in Europe’s poorer east and financially fragile south, Washington is putting pressure on Germany and others to turn down Chinese infrastructure investments that U.S. diplomats argue could hurt Western security interests.

[…] German Foreign Minister Heiko Maas said Monday that EU countries shouldn’t be naive about Beijing’s use of economic policy to promote its strategic influence. “Ultimately we all benefit if we stay united against China,” he said.

[…] Italy’s EU-skeptic populist government, however, is pursuing a commerce-first approach. In Rome on Saturday, Prime Minister Giuseppe Conte is due to sign an agreement to cooperate on the Belt and Road Initiative—China’s global plan for a network of ports, roads, railways and pipelines to expand its trade links and strategic influence. The Chinese-Italian memorandum of understanding has sparked criticism from the U.S. and alarm in the EU, which fears Beijing is trying to draw important EU members into its web of economic and diplomatic influence. [Source]

Amid mounting concerns over the strategic implications of growing Chinese political and economic clout on the continent, the European Council will use the summit scheduled for this week to decide, among other issues, whether to devise a tougher regional strategy on China as Beijing grows in importance on the European agenda. Financial Times’ Michael Peel, Lucy Hornby, and Rachel Sanderson report:

“It has finally sunk in,” says one senior EU official. “While we were absorbed in our own crises for 10 years, the GDP of China soared and Trump was elected. We entered a different game.”

[…] Now European countries are alarmed at how Beijing — like other great powers in history — is using its expanding influence to dictate terms in both commerce and diplomacy. Some EU governments complain that China discriminates against foreign companies and forces them to give up their technology, while Beijing’s foreign investments are opaque and risk leaving recipient countries in debt.

There is also growing anxiety about the potential security threats of Chinese investment in sensitive parts of the EU economy. The reassurances from Beijing that these fears are groundless are increasingly falling on deaf ears. “It’s pretty shocking they have never found time to discuss this,” Fraser Cameron, director of the Brussels-based EU-Asia Centre think-tank, says of the EU leaders’ talks. “They are saying: ‘Let’s not try to pretend that we can change China. Sometimes it’s tough and brutal — so we will have to be tough and brutal, too.’” [Source]

In line with this shift in European attitude, the European Commission published a critical strategy paper ahead of the summit. The document characterized China as “an economic competitor in the pursuit of technological leadership, and a systemic rival promoting alternate models of governance.” The report further warned of potential security risks posed by Chinese investments in Europe if actions are not taken to mitigate those risks. Some in the U.S. have praised the report as a “welcome alert” needed to prompt the E.U. towards greater coherence and unity in their dealings with China.

Diverging views inside the E.U. are, to a large extent, tied to differing economic strengths among the member states. One area of concern is that China’s diversified approach to economic diplomacy in Europe, a strategy Valbona Zeneli explains in detail at The Diplomat, may foster division and fragmentation within the E.U. in the long run:

In the eyes of Chinese investors, Europe is portioned into three distinct zones consisting of the west, the south, and the east, based on variances in economic wealth, technological advancement, geographic location and institutional framework. This view drives a diversified strategy of Chinese investments in Europe, with a focus on capital investments in the core EU countries, complemented by large infrastructure development projects on its periphery.

In Southern Europe, Chinese companies have leveraged the economic crisis and its consequences to focus on large-scale privatization process and post-crisis restructuring. In Italy, Chinese FDI has soared since 2014, approaching 5 billion euros ($5.7 billion), which corresponds to around 10 percent of total Chinese investment in the European stock market. In 2015, China’s acquisition of Pirelli made Italy the top destination of Chinese FDI in Europe, giving China access to one of the most important car tire manufacturers globally and an entry into the replacement market — a segment, until recently, dominated by the major European and Japanese brands.

[…] In Central, Eastern, and Southeastern Europe, China is operating the “16+1” platform, which brings together a very diverse group of both EU and non-EU members. Across this region, acquisition prices are lower, demand for preferential lending is high, human capital is cost-effective, and concessions for Chinese investors are simplified. Above all, the strategic location is perfect. Central and Eastern Europe map ideally to China’s main objectives: transportation networks for the Belt and Road Initiative and investment goals for further capital expansion across the EU. However, Chinese investments in the region represents a small percentage compared to the core EU countries. [Source]

Italy is expected to sign a non-binding memorandum during Xi’s visit making it the first G7 nation to participate in China’s Belt and Road Initiative. The draft memorandum of understanding outlines infrastructure investment deals and cooperation in the financial and environmental sectors. In an article written for Corriere della Sera, President Xi expressed his wish to coordinate more closely with the Italian government on a variety of issues. From Reuters:

“With my visit I wish to set out together with Italian leaders the guidelines for bilateral relations and take them into a new era,” Xi said in an article he wrote for Corriere della Sera.

Xi said China was ready to coordinate more closely with Italy over international issues such as climate change, including within multilateral organisations such as the United Nations, the World Trade Organisation and the G20.

He also said China and Italy could develop cooperation projects in sectors such as ports, shipping, telecoms and pharmaceuticals and encourage their respective companies to cooperate in third countries. [Source]

For Italy, the deal would open the country to greater Chinese infrastructure investment, particularly in ports like Trieste. Officials here say they expect Beijing-backed conglomerates, such as the China Communications Construction Company, to bid hundreds of millions of euros for infrastructure concessions.

For China, having a toehold in one of Europe’s historic ports would bring favorable customs conditions, a faster trade route to the heart of the Continent and direct access to railroads for moving its goods into the European Union.

[…] To walk through Trieste is to witness how the city has already opened to China. Chinese tourists shop for the city’s trademark Illy coffee and take pictures with their Huawei phones of the elegant Caffè Degli Specchi. A brand-new cruise ship, built in nearby shipyards expressly for Chinese passengers, is docked in the central waterfront piazza, preparing to set sail on Marco Polo’s path to the Far East.

[…] Michele Geraci, an Italian economic development minister who is running the negotiations with Beijing, said in an interview that Chinese ships carrying materials from home or its vast network of interests in Africa through the Suez Canal simply needed to get their goods to central European markets as quickly as possible.

The Straits Times spoke with experts about the implication of Italy’s endorsement of the BRI:

Professor Steve Tsang, director of the China Institute at the School of Oriental and African Studies in London, said Italy’s signing of the BRI deal has “enormous significance” – it is the first G7 country to do so, and will mean that a major member of the EU is breaking ranks with the bloc.

“Italy’s move… will be very reassuring to some eastern EU members which are much more ready to engage China more on China’s than the wider EU’s terms,” said Prof Tsang.

The endorsement will also allow Mr Xi to show that the BRI “enjoys a great reputation in Europe and the world” despite the international backlash it has garnered, said Ms Lucrezia Poggetti, research associate with the Berlin-based Mercator Institute for China Studies.

Experts say other high-priority issues this trip will include trade and Huawei, which is hawking its equipment for next generation 5G networks in Europe. The global tech giant is facing increasing global pressure, following claims from the US that its equipment could be used by Beijing for spying. [Source]

Elsewhere, French Defense Minister Florence Parly raised a tough question this week, asking whether US support for NATO is everlasting, and what would happen if Europe is left to fend for itself.