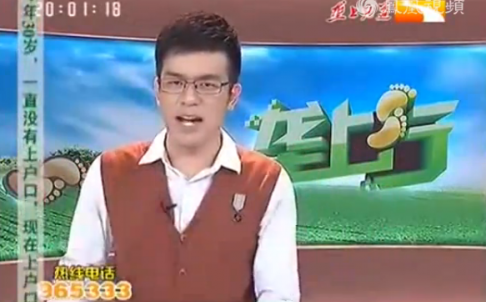 The Wall Street Journal reports that the host of an online news program was recently cut off while delivering a castigation of local corruption in Hubei Province:

Cui Jianbin, a host for a Hubei Television online agricultural news show, went on an on-air rampage lambasting government officials in Hubei province for building a lavish office building on 20,000 square meters of former farmland. Mr. Cui attacked officials for their excessive spending in a county that is listed as poverty-stricken and receives federal assistance. It wasn’t clear how much the building cost, and local government officials weren’t immediately available to comment.

“Government officials think ordinary people are blind,” Mr. Cui said before he was cut off, noting that the officials had “ignored their superiors’ instructions and spent money extravagantly.”

The enraged broadcaster’s rant was finally curtailed when an off-screen colleague interjected. Mr. Cui’s final plea before the video cut to commercial (at the 1:50 mark above): “May I finish?”

The video, which was uploaded online, has gone viral, sparking heated discussion among users on Sina Weibo. Many expressed their disappointment at the obvious censorship of free speech, with one protesting, “We want a right to free speech! A right to debate openly!” Others applauded the broadcaster and demanded the broadcaster “let him finish.” [Source]

The South China Morning Post’s coverage has a translated video clip of the latter part of Cui’s unfinished diatribe, and includes more on the Internet conversation that it inspired:

“This is the power of public opinion,” wrote one netizen in support of Cui. “Unfortunately, the media does not allow such fierce rhetoric to spread to the people, because the media has become…a tool and a propaganda mouthpiece.”

“Many children’s schools [in Hubei] are under renovation, but the [government officials] have money to go and build fancy offices?” another asked. “Those who have a conscience and a sense of responsibility should not allow such rampant corruption.”

Other Weibo commentators were not as sympathetic and argued that Cui’s tirade was unprofessional.

“The host of a programme like this needs to avoid uncontrollable emotions getting the better of him,” wrote one blogger. “[Cui] lost his objective and impartial professionalism, so it’s only natural that the television network would need to temporarily substitute [another reporter] for him.” [Source]

The web newscaster has affirmed in a weibo [zh] that he will resume broadcasting. The broadcast story that so enraged Cui and his interrupted response can be seen in its entirety on YouTube [zh].