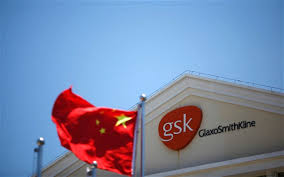 After ten months of investigation, police found that William Mark Reilly, a British national and executive of GSK China, had ordered his subordinates to commit bribery, said the police of Changsha, capital of central China’s Hunan Province, in a statement.

Reilly allegedly pressed his sales teams to bribe hospitals, doctors and health institutions through various means and gained an illegal revenue worth of billions.

He and two other executives, Zhang Guowei and Zhao Hongyan, were also suspected of bribing officials with the industry and commerce departments of Beijing and Shanghai. [Source]

GSK has not yet been charged, but is carrying out internal investigations for corruption allegations in other countries, including Iraq, Jordan and Lebanon. In 2012, GSK plead guilty to criminal charges in the U.S. and paid a $3 billion fraud settlement.

The South China Morning Post has background on the Chinese GSK probe and the case against Reilly:

The Ministry of Public Security alleged that Reilly, GSK vice-president Zhang Guowei and GSK legal affairs supervisor Zhao Hongyan formed an emergency group in 2012 to bribe law enforcement and other officials in Beijing, Shanghai and elsewhere to block a government investigation of GSK.

“Reilly and other senior GSK executives proactively covered up the bribery activities and strongly maintained the financing channels through which the bribes were funnelled,” the ministry alleged.

Since 2010, GSK’s Chinese subsidiary GlaxoSmithKline (China) Investment (GSKCI) had spent tens of millions of yuan bribing hospitals to use GSK’s liver drugs instead of Chinese-produced drugs, the Ministry of Public Security claimed. GSKCI spent 13 million yuan buying gifts like cars, television sets and video cameras, which were given as bribes to clients in health-care organisations, it said.

[…] The prosecution of foreign nationals by the Chinese authorities is likely to prompt or accelerate similar investigations by the regulators of other countries, said Keith Williamson, head of forensic and dispute services for Asia at Alvarez & Marsal, an international professional services firm. [Source]

This becomes the highest-profile corruption scandal involving a foreign company in China since 2009, when four executives of British-Australian mining company Rio Tinto were arrested for bribery and espionage. The four—one of whom was an Australian citizen—were sentenced to between 7 and 14 years in prison. Under China’s Criminal Law, “serious” cases of bribery can carry a maximum sentence of life imprisonment, and a minimum 5-year prison sentence. Coverage from Reuters notes surprise at the bribery charge among the foreign business community, and GSK’s place in China’s lucrative and rapidly growing pharmaceutical market:

Kenneth Jarrett, president of the American Chamber of Commerce Shanghai, said he was surprised at the “strong response” from the police.

“I would agree that it’s not what I would have expected because it seemed like GSK were cooperating very closely with the authorities,” he told Reuters.

[…] China is a key growth market for large drugmakers, which are counting on its swelling middle class to offset declining sales in Western countries. China is set to be the second-biggest pharmaceuticals market behind the United States within three years, according to consultants IMS Health.

“But the thing is you can’t put a company in jail and they want someone in jail. They want Mr. Reilly in jail for about 10 years. That’s what they’re looking to do,” he added. [Source]

As the initial probe was spreading to the wider pharmaceutical industry last year, commentators noted that foreign firms operating in China are sometimes compelled towards questionable business practice to keep up in an industry overrun by corruption.