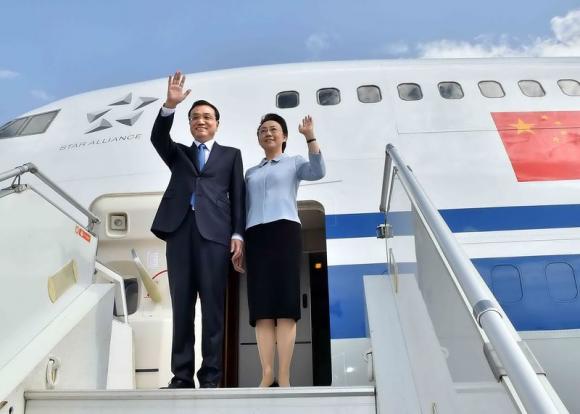 Reuters reports that Chinese state media has for the first time published the photograph and résumé of Premier Li Keqiang’s wife Cheng Hong, a professor of English literature, during the couple’s visit to Africa:

State news agency Xinhua said on Sunday that Li was married to Cheng Hong, who is aged 56 or 57. The couple, who left on Sunday for an official tour of Africa, have one daughter and met at the elite Peking University, Xinhua said.

The move to put Cheng on public display could reflect a new effort by China to cultivate soft power and burnish its image on the international stage.

Cheng has taught in the foreign languages department of the Capital University of Economics and Business for more than 30 years, Xinhua said. She specialized in English teaching and research and was responsible for a research project on “natural literature and eco-criticism”.

Reuters adds that Xi Jinping’s wife, Peng Liyuan, became the first to break the mold of first wives avoiding the spotlight after the infamy of Mao Zedong’s wife Jiang Qing.

Read more about Cheng Hong’s low profile and scholarly work in American nature writing in a 2012 report from the SCMP.