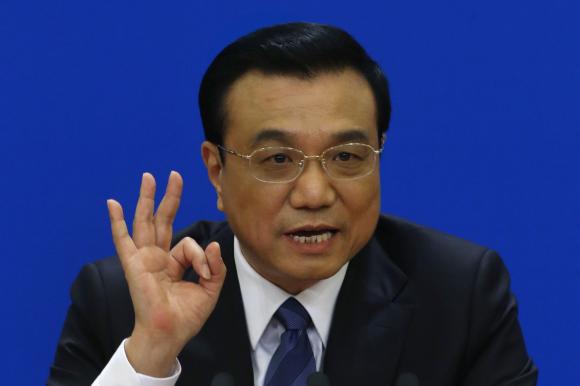 Before departing for his trip to Nigeria, Angola, Kenya, and Ethiopia, where his ministers have just signed 16 deals for the construction of roads and industrial zones, Premier Li Keqiang called disputes arising from China’s relationship with Africa “growing pains.”  Reuters reports:

He said the Chinese government was willing to sit down with African countries to resolve any issues that arose between the two sides, but said theses were “isolated” cases in a relationship based on equality and mutual benefit.

“I wish to assure our African friends in all seriousness that China will never pursue a colonialist path like some countries did, or allow colonialism, which belongs to the past, to reappear in Africa,” the official news agency Xinhua quoted Li as saying.

Chinese enterprises have spent heavily on infrastructure, mining and energy projects in Africa as the country seeks to expand its access to supplies of vital commodities such as oil and copper.

But in some cases, Chinese firms have been accused of treating local staff unfairly. Oil workers at two China-invested projects in Chad and Niger went on strike in March in protest against unequal pay.

In 2009, China overtook the United States as Africa’s biggest trading partner, and Xinhua said more than 2,500 Chinese firms operate on the continent. [Source]

Ben Blanchard at Reuters adds that Li “aims to boost African living standards” on his visit to the four countries rather than focus solely on Chinese investment in the continent:

Trips by Chinese leaders to Africa are often marked by big natural resource deals, triggering criticism from some that China is only interested in the continent’s mineral and energy wealth.

Africans broadly see China as a healthy counterbalance to Western influence but, as ties mature, there are growing calls from policymakers and economists for more balanced trade relations.

[…] Li’s May 4-11 trip will also take in Ethiopia and Kenya and Assistant Minister of Commerce Zhang Xiangchen told reporters there would be more than just oil agreements.

“During Premier Li Keqiang’s visit to the four African countries, all the relevant countries will sign some cooperation agreements between financial organizations and between companies, which are quite large in scope, not just on oil and natural resources,” Zhang said.

“There are also many on agriculture, manufacturing, people’s livelihood and basic infrastructure,” he added, declining to provide details or financial figures. [Source]

At the International Institute for Environment and Development, Xue Weng outlines three lessons she learned from speaking to five Chinese journalists who have immersed themselves in local communities in order to gain a better understanding of Africa and its people beyond the scope of Sino-African investment:

The journalists questioned the ‘China-centric’ approach China tends to take in dealing with African nations — with China as the big brother and superior economic power vis-à-vis African countries. One journalist said: “In order to truly understand African nations, we must change the China-centric perspective and learn to treat them as equals”. The journalists desire to understand Kenya through the eyes of local people – for example by visiting the Kibera slum and markets for the poor – was indicative of how such a new approach to view Africa should look like.

After a day with the journalists I was struck by their openness, ability to reflect critically, desire to understand Kenya from the perspective of local people and willingness to see Africa as an equal partner in the China-Africa relationship. In an era of Chinese consumption patterns impacting natural resources and biodiversity across the world, they represent a new generation of Chinese journalists “going out” to witness China’s footprint and to educate the Chinese public about their overseas impacts. [Source]

While Li’s visit to Africa is a hot topic for discussion among journalists, policy analysts and economists, Yun Sun at Brookings calls on observers to remember Africa’s “tiny” role in China’s foreign economic activities overall:

In reality, Africa accounts for only a tiny percentage of China’s overall foreign economic activities: China’s investment in and trade with Africa represents 3 percent and 5 percent of its global investment and trade respectively.  Politically, the continent is of small importance to China’s foreign policy agenda, with Africa playing a largely supportive role in China’s overall international strategy. Rather than being seen as “key” or a “priority,” Africa is seen to be part of the “foundation” on which China’s broader strategic ambitions are built. Compared with the “struggle” with big powers or China’s strenuous relationship with its neighbors, Sino-African relations have been relatively smooth and free of major disturbances, thanks to a shared sense of historical victimization by Western colonial powers and a common identity/affinity as developing countries. The nature of Sino-African ties is largely transactional and reciprocal.

Given the general low priority of Africa in China’s foreign policy agenda, Africa issues rarely reach the highest level of foreign policy decision making in the Chinese bureaucratic apparatus. In practice, policymaking specific to Africa happens mostly at the working level and is divided among several government agencies, with the Ministry of Foreign Affairs (MFA) and the Ministry of Commerce (MOFCOM) taking the lead on political affairs and economic affairs, respectively. On security issues such as U.N. peacekeeping operations, naval escort missions and evacuation missions, the Chinese military plays a significant role in coordination with MFA and MOFCOM. On issues under the mandate of specific government agencies, such as Chinese medical, agricultural or technical assistance to Africa, the policy is coordinated among MFA, MOFCOM and the agency directly involved.

[…] Meanwhile, the proliferation of China’s commercial actors in Africa in recent years has made government supervision and management particularly challenging. Beijing’s inability to cope with the rapidly expanding Chinese presence in Africa is exacerbated by the lack of political risk assessment and the absence of a comprehensive commercial strategy for Africa. The resolution of these issues will determine the nature and content of China’s future policy toward Africa while exerting critical influence over the future development of the continent. [Source]