Tibetans Divided Over Right to Vote in India 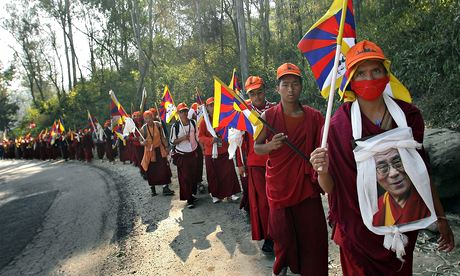 48,000 Tibetans in India are eligible to vote for the first time this year following a rule change in February, but The Guardian’s Saransh Sehgal reports that some are more eager to embrace this new right than others:

Tenzin Tsundue, an exiled Tibetan poet and activist, said: “We are not immigrants, but political refugees waiting to return home. We cannot settle in exile; our rights are in Tibet, not in India. Indian citizenship may be personally beneficial, but it will leave us divided, culturally diluted and finally get us killed by complacency.”

[…] The community of exiles began when India offered a haven to the Tibetan spiritual leader, the 14th Dalai Lama, after he and thousands of his followers fled after a failed uprising against Chinese rule in 1959. In recent years, there has been a growing debate within the community about whether or not Tibetans born in India should accept Indian citizenship, something to which they are entitled by birth.

[…] “I feel good about it as I finally got to some identity from no identity – not to be confused with my Tibetan identity, which will not be affected,” said Lobsang Wangyal, a 1970-born exiled Tibetan entrepreneur living in McLeod Ganj, the Tibetan-dominated suburb of Dharamsala. [Source]

Sehgal also describes disagreement on the issue between India’s home and foreign ministries, driven by fear of angering China. See more on the Indian elections at The Guardian.