Xi Jinping’s Odd Packaging of the May 4th Spirit 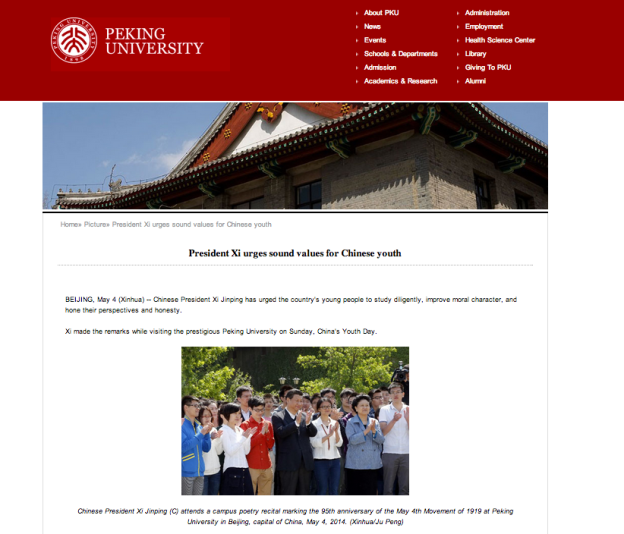 At the Los Angeles Review of Books blog, Rebecka Eriksson discusses Xi Jinping’s “peculiar” references to the May Fourth movement in a talk at Peking University earlier this month:

The timing of Xi’s visit to Beida was notable.  He went to the campus to help the university mark the 95th anniversary of the May 4th Movement, which is important not only to the university but also to the CCP, which celebrates it as an event that helped put China on the glorious path to the “Liberation” of 1949.  His comments to students, not surprisingly, focused on the need to carry forward the patriotic “spirit of May 4th,” and, equally unsurprisingly, called on educated youths to follow the CCP’s guidance in doing this.

If it sounds a bit contradictory to call for students to look back on a time of radicalism, but do so in a way that supports the status quo, it is. Moreover, in speaking about any sort of student activism in the past, Xi was touching upon a potentially risky subject, given the nearness of the anniversary of the bloody 1989 crackdown that the CCP refused to talk about — or let others on the Chinese mainland discuss..

The fact that the anniversaries of movements that took place in years ending with a nine fall at roughly the same time makes things really complicated.  Student protesters of 1989 claimed inspiration from the May 4th Movement, just as the Chinese Communist Party does. By invoking May 4th and the intimately related New Culture Movement (a term for a variety of iconoclastic and experimental intellectual currents from the period lasting from the mid-1910s through early 1920s), the 1989 protestors at Tiananmen Square sought to reclaim a sacred part of national history for themselves, presenting themselves as truer patriots than the people ruling China, in doing so highlighting the ways in which the Party had strayed from its roots.  Without mentioning any of this history, when Xi invoked May 4th this year, he worked not just to reclaim it for the Party, but also to distance it from past debates by wrapping it in decidedly 21st century associations such as his government’s newly pronounced “Chinese dream.” Surely there must be some confusion as to what the “spirit of May 4th” really is, when it can just as confidently be used to incite protests and arguments for democracy and reform as it can be used to reaffirm the authority of whatever the CCP orthodoxy of the day may be. [Source]