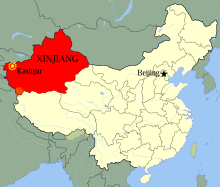 According to official sources, assailants drove a car into a police station in Kashgar, Xinjiang and detonated an explosive. Police responded and killed 13 attackers. Three police were lightly injured. Few details about the incident are available. From the BBC:

The attackers drove a car into the station and set off explosives on Saturday morning, the local government said on its website.

Three police suffered minor injuries but no civilians were hurt, it added.

The Chinese authorities blame Muslim Uighurs from Xinjiang for an increasing number of attacks in the province.

“On the morning of 21 June, a group of thugs drove a car into a police building in Yecheng County, Kashgar province and detonated explosives,” the local government website said.

“Police shot dead the 13 attackers,” it reported. It provided no further details. [Source]

The Tianshan website said in a one-line report that no civilians were hurt in the attack in Kashgar prefecture in Xinjiang’s southwest. The official Xinhua News Agency said one vehicle was used, though it did not provide specific details.

Officials in the region contacted by phone either said they were unclear about the situation or refused to comment. [Source]

This incident is the latest in a string of violent attacks in Xinjiang, several of which have involved automobiles. As part of a broad security clampdown in the region, authorities announced a new crackdown on Internet content that promotes terrorism or violence.