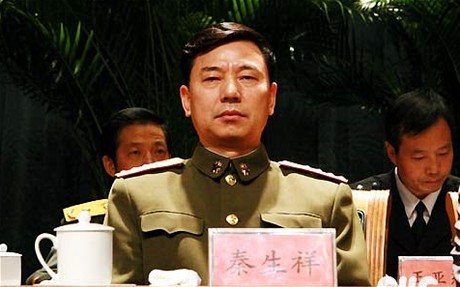 The Telegraph’s Malcolm Moore writes that two officers who led troops into Beijing in May and June 1989 have since risen to the elite Central Military Commission, but their roles in the Tiananmen crackdown are not found in their official biographies:

The PLA continues to feel such shame over the blood spilt on the streets of Beijing that decades of service have been carefully wiped from the official biographies of General Zhang Yang and Major General Qin Shengxiang.

However, military insiders, PLA veterans and historical records show that the two men, who are both thought to be close to the Chinese president Xi Jinping, were deployed to Beijing to quell the student protests.

Their standing at the top of the army suggests that calls from the families of the victims for an official reevaluation, and apology for what happened, will continue to be ignored.

[…] “The Communist party’s line is that what they did was right,” said Zhang Gang, a former policy advisor to the Beijing leadership before the student protests. “They say they saved the Party and the country. So how come no one wants to be associated with it, to remember it or to take credit for this supposed triumph?” he asked. [Source]

Each of Deng Xiaoping’s successors, Moore writes, has received and rejected a petition from within the PLA for June 4th to be officially reassessed. But as time wears on, those making such calls are becoming fewer and less influential.

At The New York Times, Andrew Jacobs and Chris Buckley report on evidence of dissent within the PLA as the crackdown took place, most prominently from Major General Xu Qinxian, who was arrested, expelled from the party, and imprisoned for four years for refusing to lead troops into the city. Such defiance sparked rumors of fighting between PLA units among the public, and intense fear within the Party that it could not rely on its own army.

The interviews and documents show that even at the time, few in the military wanted to take direct responsibility for the decision to fire on civilians. Even as troops pressed into Beijing, they were given vague, confusing instructions about what to do, and some commanders sought reassurances that they would not be required to shoot.

In an interview, a former party researcher with military ties confirmed the existence of a petition, signed by seven senior commanders, that called on the leadership to withdraw the troops.

“The people’s military belongs to the people, and cannot oppose the people,” stated the petition, according to the former researcher, Zhang Gang, who was then trying to broker compromise between the protesters and the government. “Even less can it kill the people.”

[…] Mr. Deng and his allies were so alarmed by spreading misgivings about martial law that they disconnected many of the “red phones” that allowed senior officials to speak with one another, Mr. Zhang said. But Colonel Wang [Dong, who organized the petition,] offered to use his elite connections to organize a show of dissent from within the military. [Source]

Despite the petitioners’ claim, the PLA is formally the army of the Party, not the people, and though there are occasional calls for its nationalization, this shows no sign of changing. “Defense of the party is always Mission No. 1,” CNA Corporation’s David M. Finkelstein told The Times for a recent report on an overhaul of the military. “The officers of the P.L.A. are party members who happen to wear uniforms.”

A different perspective from those of the officers comes from artist Chen Guang, who took part in the crackdown as a teenaged soldier, and was detained last month after staging a private performance to mark its anniversary. Before his detention, he told The Times’ Andrew Jacobs how the frontline troops had wavered during their abortive initial push into Beijing:

On May 20, we headed into the city, with the objective of going to Tiananmen Square. But on the way there, our convoy was stopped by an ocean of students on Chang’an Boulevard at Gucheng Street. Standing in the backs of trucks with our automatic rifles, we were told not to get out and to have no communication with the students. It was so crowded on the truck that we couldn’t sit down. We were forced to listen to the students’ speeches. At first, we weren’t allowed to look at them directly, but when they started to speak, we couldn’t ignore them.

They said China had become seriously corrupt. They said Beijing was very stable, that there were no problems. They asked, “Why have you come here? The People’s Liberation Army should be protecting our borders. Everything we are demanding is legitimate, and you should be supporting us.”

They talked like that day and night, for three to four days. The students and citizens gave us food: cucumbers, watermelons, tomatoes, orange soda and cups of water.

[…] I was perplexed. Who was telling the truth, and who was lying?

[…] At first, we refused to take their food. Later, we accepted it. Sometimes nearby hotels or restaurants would bring meals to the truck. The higher-ups must have known this, and they knew that, if it continued, it would be very bad for them. [Source]

At NPR, Louisa Lim recounted Chen’s experience of the crackdown itself as one of tens of thousands of soldiers stationed in the Great Hall of the People at the edge of Tiananmen Square, with only vague, second-hand orders and little grasp of what was unfolding around him. Chen’s recollections are featured prominently in Lim’s current book, People’s Republic of Amnesia: Tiananmen Revisited.

As he waited for the order to deploy in Tiananmen, Chen recalled when we spoke last year, he could hear a crackly warning being broadcast on a loop, instructing people to leave the square immediately. Nerves were so taut among the young soldiers, with their clips of bullets slung across their chests, that there were several accidental discharges, sending bullets ripping through the ceiling of the hall. Earlier, Chen had traveled to the square dressed in civilian clothing, crouched in a public bus packed full of guns and ammunition. Now he was waiting to use those weapons.

As the doors to the hall opened, a murmur passed down the line from soldier to soldier. “There wasn’t a clear direct order or anything like that,” he says, “but the guys up front would tell the guys behind that if you run into danger, you can open fire and that was an order from above. No one said it directly.”

[…] Chen watched as the students — tiny as ants below — clustered around a monument, singing the Communist anthem, “The Internationale.” Finally, at 4 in the morning, the students negotiated their exit from the square. They filed out, weeping, faces blank with fatigue.

As the students left, they were applauded by Beijing residents; the same people shouted abuse at the soldiers, calling them “dogs” and “fascists.” But at that moment, Chen Guang’s main emotion was relief, since he still believed the soldiers had been firing warning shots into the air and thought there’d been no major loss of life. [Source]