Tiananmen 25: Still Fumbling Towards Rights For All 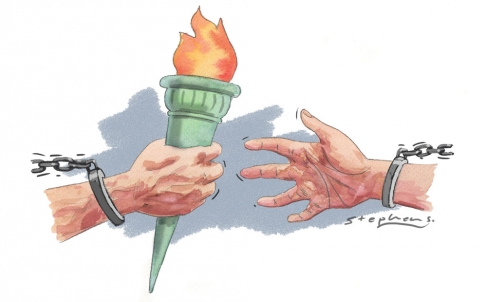 At South China Morning Post, law professor Jerome Cohen writes that although some aspects of China’s legal development recovered from the aftermath of the 1989 Tiananmen crackdown, practical protection of civil and political rights remains elusive:

We are entitled, 25 years later, to ask about the enduring legacy of June 4. Its immediate impact on China’s legal system and civil and political rights was, of course, disastrous. For several years, savage repression decimated a system that, only a decade earlier, had begun its post-Cultural Revolution reconstruction.

[…] The past 20 years have witnessed a continuation of China’s legislative progress. But what has not continued, despite attractive constitutional amendments and generally progressive procedural and substantive laws, is the promise of gradually realising the freedoms of expression, association, assembly, demonstration and religion enshrined in China’s constitution. Nor, in practice, has the police-prosecutorial-judicial system over which the Communist Party presides protected the criminal justice and litigation rights of those unfortunate enough to become involved in “sensitive” cases, broadly defined.

[…] Indeed, in recent years, despite China’s impressive economic development, the situation for civil and political rights has significantly deteriorated, and prospects for the immediate future appear grim. The long-time criminal detentions of the distinguished human rights advocate Gao Yu , the able public interest lawyer Pu Zhiqiang and many others are a sobering reminder of reality. [Source]

“In order to avoid ending on a despondent note,” Cohen notes Taiwan’s metamorphosis from dictatorship to democracy, which in 1989 was still in its early stages. This, he writes, “offers mainland human rights advocates a ray of light at the end of today’s dark tunnel.” Comparing the Tiananmen protests with Taiwan’s current Sunflower movement at the University of Nottingham’s China Policy Institute Blog, Ming-Yeh T. Rawnsley writes that Taiwan’s own political progress is far from complete:

[…] Taiwan has been a democracy since martial law was lifted in 1987 and the introduction of constitutional reforms in 1990. However, democratisation is an endless process. The unresolved questions of the island’s ‘first wave’ of democratisation have left many thorny issues yet to be dealt with. For instance, where are the checks and balances to presidential power in Taiwan’s current political system? How can the capacity and quality of the legislature be strengthened? How can the people be empowered to supervise politicians more satisfactorily than simply casting a vote periodically? […]

[…] The Sunflower movement was able to galvanise public sympathy because it struck a chord with what already exists within modern Taiwanese society — a deep dissatisfaction with polarised party politics, an ineffective representative democracy and widening social inequality. In other words, while the Tiananmen movement failed to bridge the gap between its demands for political democracy and the demands for social equality, the success of the Sunflower movement resides in its ability to connect the political with the social; it acknowledges that Taiwan is in need of further democratisation in order to re-establish a more responsive (instead of reactive) political system conducive to greater societal transformation and progression. [Source]