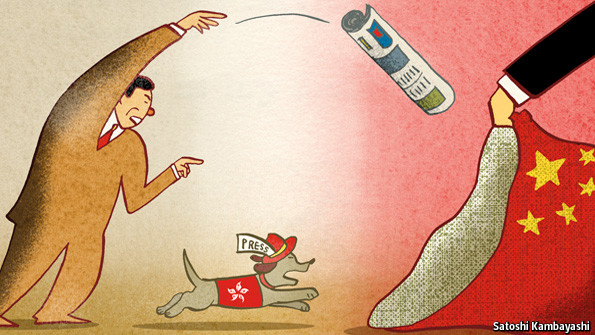 As one set of new press regulations follows another, The Telegraph’s Malcolm Moore describes the continued chilling of the climate for China’s investigative journalists.

Zhang Zhi’an, who produced a comprehensive survey of investigative reporting in 2011, estimates that the number of journalists responsible for “independent, public-interest, negative or sensitive” reports has fallen by 66 per cent in the last three years.

“There are no more than 200 of this type of journalist left in China, out of the million or so working in the media,” he said.

[…] “There is no way for the media to be a watchdog over the government at the moment,” [former investigative journalist Wang Keqin] said, dismissing a recent wave of investigative reports about corrupt officials.

“These journalists are not trying to catch tigers while they are alive. They are cooperating with the government to beat dead tigers. They have no option. The government assigns the homework and they have to do it.”

[…] Because of the recent regulation reminding Chinese journalists not to talk to foreign reporters, none of the working journalists we interviewed can be safely named. [Source]

The State Administration of Press, Publication, Radio, Film and Television announced new restrictions on “critical reporting” last month. This may have been more signal than substance, but has been followed by new emphasis on control of state secrets and the introduction of secrecy agreements as a condition of press certification.

In a conversation at ChinaFile, Orville Schell describes the history of the Leninist-Maoist view that the Party should have a “right, obligation, and commitment to manage China’s press to serve its own goals,” while former chairman of Thomson Reuters China David Schlesinger looks at the most recent restrictions and their likely effects:

For much of the last two and a half decades, Chinese journalists have been pushing the boundaries—many going into grey areas, others stepping boldly into danger zones, others yet going into forbidden areas and getting punished for it. Chinese journalism, both domestic and international, is much the better for this bravery.

[…] Yet the Sword of Damocles has always hung over these brave reporters’ and editors’ heads.

[…] So why the new regulations? Why fray the threads on the hanging sword to make the sense of danger all the more imminent?

Certainly many things in the last 18 months have become much tighter in China and the restrictions on reporting and expression much stronger. What these new announcements will do will make the sense of doom ever more present, and make self-censorship seem ever more necessary. Faced with the loss of profession, livelihood, or freedom, only the bravest journalists will continue to push the boundaries. Most will retreat. Most will wait to see how the regulations are actually used. Most will pull back from the reporting and the transparency that a modern society needs. [Source]

The Economist, meanwhile, reports that Hong Kong’s formerly aggressive press has been largely brought to heel by other means:

[… T]he press in Hong Kong, despite still being far freer than its counterparts on the mainland, has lost much of its punch. The Hong Kong Journalists Association (HKJA) said in a report this month that the past year had been “the darkest for press freedom” in several decades. Under “one country, two systems”, the formula used to govern the territory after the handover, Hong Kong was assured that its press would retain its former freedoms. However, it has been tamed in more subtle ways: ownership has shifted to pro-Beijing tycoons, and advertising has been used to exert pressure—as have violence and intimidation. According to a survey by the HKJA of 663 local journalists in 2012, 79% believed that self-censorship had risen since 2005, and 36% said that they or their supervisors practised it.

[… I]n the past two years several news organisations have experienced management shake-ups and worrying episodes of intimidation. The South China Morning Post, Hong Kong’s leading English-language newspaper, has recently installed a number of senior editors who have worked at mainland newspapers or agencies. Frustrated journalists at the paper tell of stories that are critical of China often being toned down or dropped altogether. In February Commercial Radio axed Li Wei-ling, a talk-show host who frequently takes the government to task; she accused her employer of bowing to government pressure in exchange for the renewal of its licence. In January Kevin Lau, Ming Pao’s chief editor, was removed, to the shock and anger of many of the paper’s reporters. Then, on February 26th, Mr Lau was nearly killed in a knife attack. [Source]