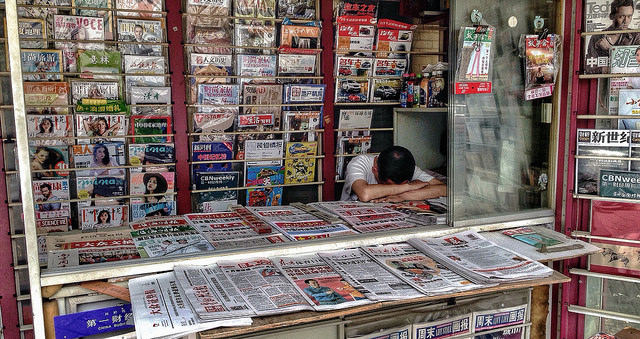 Following the announcement of regulations on “critical” news reporting on Wednesday, the deputy head of China’s State Administration of Press, Publication, Radio, Film and Television has denied that the aim is to stifle legitimate criticism. From Ben Blanchard at Reuters:

“Some people misinterpreted our instruction as not allowing press criticism in general, but in fact, we have resolutely protected reporters’ lawful professional rights and positively support media supervision via public opinion,” Jiang said.

The order that reporters get their employers’ approval to conduct critical reporting is “in line with regular regulations and addresses the problem journalists abusing their positions for blackmail”, Jiang added.

The rules are part of a national campaign against crooked and fake reporters who demand hush money for burying negative stories, which often are untrue, Xinhua said. [Source]

David Bandurski wrote at China Media Project that, while some of the rules’ phrasing was “dangerously ambiguous,” there had been a “degree of alarmism” in foreign media reactions. Rather than a practical shift, he describes the rules as “a warning siren alerting media to the fact that the Party […] is more serious now about exercising what it sees as its right — the control of all channels of information.”

It bears noting […] that there is little of substance in the June 18 circular on “critical reporting” that we can say unequivocally represents a “tightening” or “worsening” of the situation for journalists in China. Which is not to say — I repeat, NOT to say — that continued attention to the issue of press freedom in China is not crucial (it is), or that there is any doubt we’ve seen a progressive worsening of the situation for professional journalists and internet users alike in China.

Yes, the media situation in China has worsened in recent months and years. In a sense, for China’s traditional media, what looked like a seasonal freeze back in 2004 has settled into an extended Ice Age. You could say that the Southern Weekly incident in January 2013 was the culmination of tensions within Chinese media over the progressive rollback of professional gains made from the late 1990s up to 2003. These included bans on cross-regional reporting, efforts by the Party to more actively “use” commercial media as vehicles for its own propaganda, and the installment of news examiners inside media conducting prior censorship.

But when Quartz reported the headline yesterday that, as a result of the June 18 circular, “Now China can censor journalists before they even start reporting a story,” it got the both the story and the background wrong. [Source]

Read on for Bandurski’s detailed analysis of the new rules, with context and reactions. “China’s officialspeak notices,” he also commented on Twitter, “are PR disasters waiting to happen.”

Writing under his customary pen name Shan Renping, meanwhile, Global Times editor Hu Xijin called for clearer rules and the protection of journalists’ right to act as “a watchdog of public opinion.” But he drew a distinction between “rightful” media criticism and any Western-flavored negative comment on China’s basic political system:

Now in China, it is impossible to ban all critical voices. But it must be noted that these criticisms, including critical reports, are bound to contribute to the development of Chinese society. They cannot simply follow the trail of many Western media, because their ways won’t always match Chinese society.

Chinese media professionals must realize that their attempts to do critical reports about the entire national system won’t succeed. China is establishing its own pathway for prosperity. This is an entirely new framework in human history.

Chinese media should learn how to get involved in the system, and play a constructive role. Their contributions will be measured by the results of their deeds. Chinese media professionals must know that in the West, media manipulates the direction of social development based on its likes or dislikes. This will not work in China. [Source]