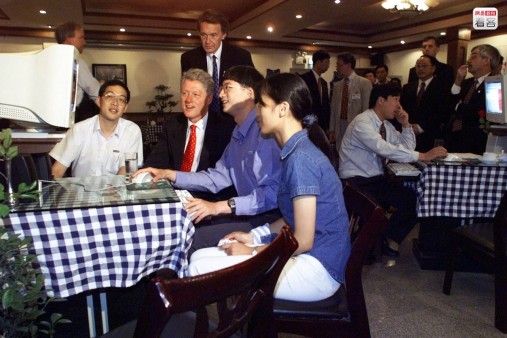 chinaSMACK translates a NetEase photo gallery documenting the rise and fall of China’s Internet cafés, or wangba, together with some reader comments. Wangba played a critical role in extending the Internet’s reach in China but were subject to escalating government restrictions, particularly after 25 people died in a Beijing internet café fire in June 2002. The real cause of their decline, though, has been the explosion of private internet access through personal computers and particularly mobile devices. […] Internet bars became a bridge for young people to interact with the world, as well what many post-’80s generation regard as an essential memory of their youth.

网易天津市手机网友 [小神J0YZ] 的原贴： Internet bars maybe doomed? Don’t be ridiculous, you think you can put together a few pictures and say they’re doomed? Garbage editor. Right now internet bars are all going high-end, with really good machines, trending towards professional gaming. Going online has even gotten more expensive, three if not four yuan, and some are even seven yuan an hour. The environment/premises are comfortable, and there’s no lack of people.

老痰酸菜面 [网易江苏省南通市手机网友]： Without internet bars, [China] would be be the same as North Korea. [Source]