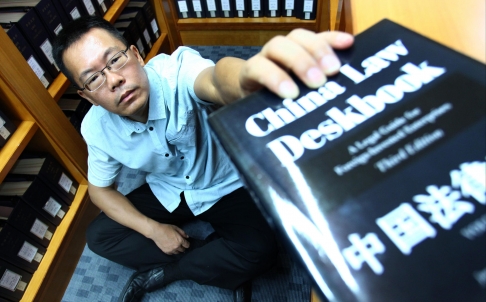 South China Morning Post’s Verna Yu profiles Chinese rights lawyer Teng Biao as he moves to Harvard after two years as a visiting scholar at the Chinese University of Hong Kong. He discusses the shifting political climate that saw him first praised for his work, then barred from teaching or practicing law, repeatedly detained, and held in solitary confinement for ten weeks in 2011.

Over the past year and a half, scores of his friends and fellow campaigners, including legal scholar Xu Zhiyong and lawyer Ding Jiaxi of the New Citizens Movement, have been jailed over their calls for officials to declare their assets.

Without going into specifics, he said mainland authorities were now targeting his family as a way of punishing him. But he insisted: “I cannot give in.”

[…] Teng said it was ironic how he and Xu, lauded in 2003 by state media for their contributions to the rule of law, ended up considered “enemies of the state”.

“But we haven’t changed, we’re still pushing the rule of law and human rights – it’s the government that has changed; they now see us as troublemakers.” [Source]

Read more by and about Teng Biao via CDT.