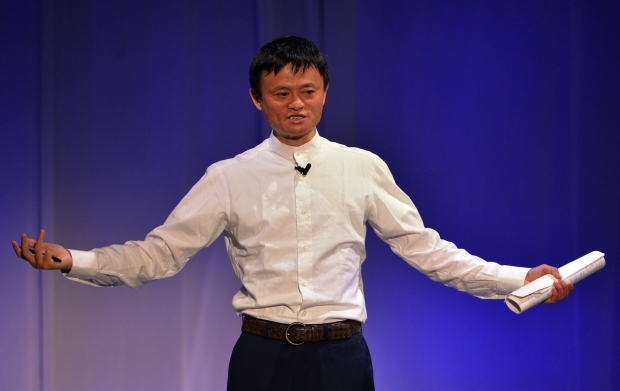 Alibaba, the Chinese e-commerce giant, opened at $92.70 a share on the New York Stock Exchange on Friday, making it the highest initial public offering in U.S. history. Drew Harwell at The Washington Post reports:

Alibaba Group, the Chinese Web juggernaut that has become the world’s biggest online retailer, will sell its first shares to the public Friday in one of the most lucrative debuts in stock market history.

Though little known in the United States, the tech powerhouse has in 15 years transformed life in China, where 80 percent of online sales pass through an Ali­baba site. Its colorful, chaotic marketplaces, where consumers can buy nearly anything, saw $248 billion in sales last year, more than Amazon.com and eBay combined.

[…] The company, trading under the ticker symbol BABA, said Thursday that it had priced its shares at $68 each, valuing the megafirm at $168 billion — more than the value of Amazon.com.

The company’s initial public offering is expected to raise $21.8 billion, although its underwriters could exercise an option to buy more shares, sending its total past $25 billion. That would better the largest U.S. IPO, Visa, which raised $19.7 billion in 2008, and the $22 billion raised by the Agricultural Bank of China in 2010. [Source]

Despite the frenzied interest that Alibaba’s IPO has generated in investors, analysts suggest that there are still reasons to be concerned. From Market Watch:

But Alibaba’s IPO is far from a sure bet and its strongest asset–namely being a Chinese company–is also its biggest risk, according to Bill Stone, chief investment strategist at PNC Asset Management Group.

Here are the risks as Stone sees them:

At the Guardian, Suzanne McGee explains that the e-commerce giant’s top-down ownership structure effectively limits the influence that IPO investors have on the company’s internal operation and management.

It can be summed up this way: we will take your money, but we’re not interested in your ideas.

[…] At the Chinese company, power will be concentrated in the hands of a 28-person partnership. That group will have the right to name a majority of the company’s directors, thus giving them effective control of the business.

[…] A small group of insiders will control the company’s strategic direction. If they’re unhappy with the way Alibaba’s management team, lead by founder Jack Ma, is handling the business, or if they want to insist that the company consider an unsolicited acquisition offer, there is literally nothing that an unhappy outside investor can do other than to sell his shares. [Source]

Due to state regulations, Chinese investors will not be able to purchase Alibaba’s shares directly. Instead, investors in China must go through an expensive investor program that only the wealthy can afford. Bloomberg Businessweek reports:

Though Chinese consumers have driven Alibaba’s financial success, they’ll largely be left out of the company’s stock offering. Mainland investors can’t purchase overseas equities directly due to government restrictions and only the wealthiest can buy them indirectly through qualified investor programs.

[…] Chinese investors can purchase foreign securities indirectly through what’s known as a Qualified Domestic Institutional Investor program. Such funds are run by asset managers who give broad guidelines of what they plan to invest in and then choose specific stocks.

[…] That fund will be limited to the richest Chinese. The minimum investment in these programs is about 1 million yuan ($163,000) with an expected yield of about 120 percent and investment period of three months, the paper said, citing a company prospectus. Rongtong Capital officials weren’t available to comment on the report. [Source]

At China File, David Woolf discusses why Alibaba’s ties to the Chinese government and its connections to the offsprings of high-ranking Communist Party members will not hurt the company and its prospects.

After such an offering, speculation would grow about Jack Ma’s residual ties to the government and the company’s relationship with Xi Jinping’s administration. Analysts would cast a revisionist eye on the company’s history, seeking out the critical junctures where it simply have been government help that allowed Alibaba to beat eBay, Paypal, Amazon, and a legion of local competitors. It is, after all, far more comforting to ascribe the extraordinary success of others to special privilege than it is to think that they were faster, smarter, and better than we. And in a nation where special advantages have been at the heart of so many successful enterprises, it is somehow far more convincing than a singular Horatio Alger story with Chinese characteristics.

But does it matter? Even if the worst happens—even if Wall Street and the Chinese people believe that Alibaba succeeded because of its connections—the juggernaut is unlikely to be slowed. Taobao and Alipay have market positions akin to public utilities in China, key parts of the life infrastructure of two generations of Chinese people. Investors, rather than be deterred by the prospect of strong government support, will be encouraged by it. The only thing that could impede Alibaba now would be for the Xi administration to cast its anti-corruption beacon on the company and its investors. There is only one person in the world who knows whether that will happen, and he seems busier promoting China’s Internet giants than hobbling them. [Source]

At Time magazine, Michael Schuman looks at some of the important changes and trends that Alibaba’s IPO reveals about the world economy and its future direction:

More and more of the world’s most prominent companies will be from the developing world.
We still have this image of China as one big factory floor where millions of poor people slog away on assembly lines churning out cut-rate toys, clothes and electronics. Sure, there are still factories like that, but ever more that low-cost manufacturing center guise is becoming the Old China. The world’s most populous nation is developing so rapidly that it is already producing companies that are major players in all sorts of industries. Lenovo is now the largest PC maker in the world, while Huawei is challenging the best of the West in telecom equipment.

[…] Emerging markets are creating blue chips.
Ever since the idea of investing in the developing world became popular in the early 1990s, there has been a line drawn between these “emerging markets” and the more established bourses of the U.S., Europe and Japan. Emerging markets were supposed to be riskier, where only the bolder of investors would dare tread, compared with the supposedly more trustworthy and less volatile options in New York City and London. The Alibaba IPO shows how that great wall is breaking down. That a company based in a town like Hangzhou can raise more money in its IPO than one based in Menlo Park, Calif., (Facebook) shows that investors are starting to treat firms from the developing world on par with those in the developed world. Of course, the stigma staining companies from China and elsewhere won’t go away overnight — Chinese companies that have listed in New York City have had a sad history of accounting disasters. But going forward, your stock portfolio is going to hold more companies with addresses in Shanghai, Mumbai, Istanbul and São Paulo. [Source]

Alibaba is one of the world’s most valuable Internet companies. Together with Tencent, Baidu, and JD.com, Alibaba’s success illustrate the rise of Internet powerhouses in Asia. The Wall Street Journal reports:

Silicon Valley dominates the Internet, but this week’s initial public offering by Alibaba Group Holding Ltd. shows how much action is shifting to Asia.

Read more about Alibaba, via CDT.