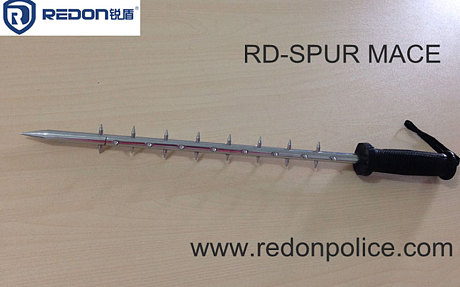 A report (PDF) published on Tuesday by Amnesty International and the Omega Research Foundation details China’s expanding exports of torture and law enforcement equipment. More than 130 companies, most of them state-owned, are now involved in the trade, up from 28 ten years ago. From Amnesty:

Some of the devices openly marketed by these companies – including electric shock stun batons, metal spiked batons, and weighted leg cuffs – are intrinsically cruel and inhumane and therefore should immediately be banned.

Other equipment – that can have legitimate use in policing – such as tear gas and plastic projectiles or riot control vehicles – is being exported from China even when there is a substantial risk of serious human rights violations by the receiving law enforcement agencies.

[…] “There is no excuse whatsoever for allowing the manufacture and trade in equipment for which the primary purpose is to torture or inflict cruel, inhuman or degrading treatment on people. These heinous acts are totally banned under international law and Chinese authorities should immediately place a ban on the production and trade in such cruel and inhumane devices,” said Patrick Wilcken.

One company – China Xinxing Import / Export Corporation – which has advertised equipment including thumb cuffs, restraint chairs, electric shock stun guns and batons – stated in 2012 that it has links with more than 40 African countries and its trade with Africa was worth more than US$100 million. [Source]

Chinese Foreign Ministry spokeswoman Hua Chunying responded that “this international organization is always biased against China and I really doubt the authenticity of the report that has been released.” But The Telegraph was able to corroborate many of the findings by approaching companies directly, Malcolm Moore reports:

Contacted by the Telegraph, several companies offered to export equipment banned by Europe and the United States. “We have spiked batons and can air freight them,” said the Jiangsu Wuwei Police Equipment Manufacturing Corporation.

“We export around ten per cent of our goods and we have partners with certificates for military equipment export. We sell to the United States, Cyprus and some other countries.” The East Qiangsheng Technology company in Beijing said it could offer steel spiked batons weighing 1.5kg for £6 each, with a discount for bulk orders.

“We do not export them,” a salesman said. “Most of the time, they are used by security guards transporting money because they look intimidating,” he added.

The Anhua Police Equipment Manufacturing company offered a range of handcuffs and restraint chairs. “Is it legal? Well, we can do it through special channels,” a salesman said. [Source]

The growth in China’s international trade in tools of torture and repression has taken place against a backdrop of continuing human rights violations at home. Torture and ill-treatment as well as the use of arbitrary force remain widespread in detention and in suppressing protests in the country. Amnesty International has documented a wide range of physical torture in China including through the use of electric shock batons.

One Chinese torture survivor told Amnesty International: “They [police] used an electric baton on my face – it’s a kind of torture the police call “bengbao popcorn” because your face splits open and looks like popped corn. It smelled horrible, the smell of burning skin.” [Source]

On Monday, the Associated Press noted the conviction of seven people in Harbin for the abuse of suspected drug dealers.

One of the cases resulted in the death of a man who was tortured with electric shocks and hit on the head and face with a shoe, Xinhua News Agency said Sunday. Mustard oil was poured into suspects’ mouths in other forms of torture, it said.

The seven cases happened in March 2013 at the Daowai district police sub-bureau in the northeastern city of Harbin. Three police officers and four people hired by police to help with the investigations were convicted and given prison sentences of up to 2½ years, it said.

Chinese authorities have said that the problem of torture and coerced confessions has been effectively addressed by measures introduced in the last five years, including physically separating interrogators from suspects, video recording of interrogations, and a formalized rule that judges should reject evidence obtained through torture.

[…] Hong Daode, a criminal law professor at China University of Political Science and Law in Beijing, said, “It looks like the sentences given by the court are too lenient … and it will set a bad example for future torture cases.” [Source]

Previously, six officials were imprisoned over the fatal torture of Wenzhou SOE employee Yu Qiyi, but critics argued that their superiors had been shielded from responsibility. China has seen a number of high profile acquittals of suspects whose convictions were based on false confessions extracted through torture. Another Amnesty report this year found that Chinese were among the most likely worldwide to agree that “torture is sometimes necessary and acceptable to gain information that may protect the public,” with 74% approving. See more on torture in China via CDT.