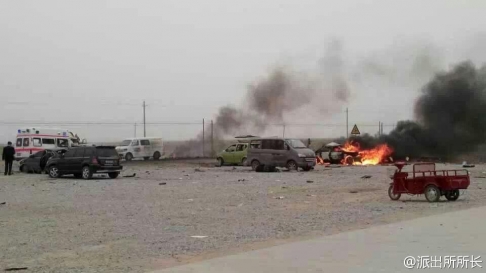 At least two people have been killed and several injured in a series of explosions in Xinjiang, according to official news sources. Patrick Boehler at South China Morning Post reports:

Explosions hit at least three locations in Xinjiang’s Luntai County at around 5pm on Sunday, the Tianshan news portal, run by the regional government, said in a short report on Monday morning.

The report did not identify the explosions, which appeared to be coordinated attacks, as acts of terrorism.

“The local social order was normal,” the report said, indicating that there was no further unrest following the explosions.

[…] The explosions occurred on the day China’s highest court, top prosecution office and the Ministry of Public Security, which handles policing, issued instructions to their subsidiary organs throughout the country on how to deal with cases of terrorism and religious extremism, describing them as a “grave threat” to national security and social stability.[Source]

Meanwhile, Simon Denyer and colleagues from the Washington Post tried to travel to Shache, Xinjiang, the site of a violent incident last month, but were detained and deported from the region. Denyer reports on the impact the crackdown on terrorism and religious extremism is having on the lives on Uyghurs in Xinjiang:

China’s campaign against separatism and terrorism in its mainly Muslim west has now become an all-out war on conservative Islam, residents here say.

[…] The religious repression has bred resentment, and, at times, deadly protests. Reports have emerged of police firing on angry crowds in recent weeks in the towns of Elishku, and Alaqagha; since then, Chinese authorities have imposed a complete blackout on reporting from both locations, even more intense than that already in place across most of Xinjiang.

[…] Across Shache county, the Internet has been cut, and text messaging services disabled, while foreigners have been barred. But in snatched conversations, in person and on the telephone, with the few people in the region brave enough to talk, a picture of constant harassment across Xinjiang emerges. [Source]

Read more about Xinjiang, via CDT.