14th Dalai Lama Says He May be the Last 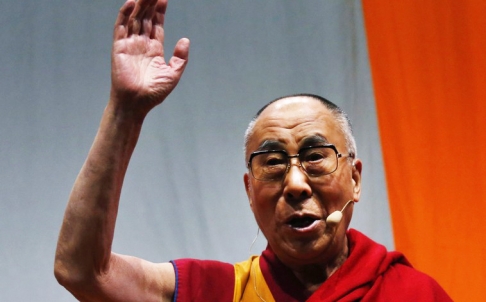 The 14th Dalai Lama said in an interview with a German newspaper that he intends to be the last spiritual leader of Tibet, preempting dispute over his succession. Agence France-Presse in Berlin and Patrick Boehler of South China Morning Post report:

“We had a Dalai Lama for almost five centuries. The 14th Dalai Lama now is very popular. Let us then finish with a popular Dalai Lama,” he told the Welt am Sonntag newspaper in an interview published on Sunday. According to the interview, the 79-year-old said his spiritual role could expire with his death.

“If a weak Dalai Lama comes along, then it will just disgrace the Dalai Lama,” he said, according to a transcript of the interview, which was conducted in English.

[…] Robert Barnett, director of the Modern Tibetan Studies Program at Columbia University said it was important to distinguish between the Dalai Lama’s political and religious roles. “It’s more likely that in this interview he was being categorical that there will be no return to the political role of the Dalai Lamas (“the institution”), while expressing conventional modesty and uncertainty about returning as a spiritual figure,” he wrote in an email.

[… I]n 2011, he said only he and authorities of his lineage, but not Chinese authorities, could recognise his successor. At the time he said he hadn’t decided whether there should be one at all. [Source]

The Dalai Lama’s decision to end his spiritual leadership without a successor comes as world leaders are increasingly pressured by China to keep their distance from him. The South African government’s decision to deny the Dalai Lama a visa, which forced him to cancel his attendance at a Nobel peace conference in Cape Town next month, is one of the latest examples of foreign governments’ desire to dissociate themselves from the Tibetan leader. Timothy McGrath at the Global Post reports:

We learned on Sept. 4 that South Africa had denied a visa request by the Dalai Lama, the head of Tibetan Buddhism and symbol of Tibetan freedom, who’d been planning to attend the 14th world summit of Nobel peace laureats in Cape Town. (He won the prize in 1989.) It’s widely assumed — and the Dalai Lama’s representative to South Africa claimed — that the decision had to do with South Africa’s economic ties with China, a country that considers the Dalai Lama a separatist.

From reading headlines around the world today, you’d think this was a major event in geopolitics.

It’s not. The Dalai Lama is losing friends all over the place as the world undergoes a geopolitical realignment.

[…] Around the world, governments are limiting their contact with him — in some cases because of direct pressure by China, and in other cases, because of the chilling effect that pressure creates. [Source]

Read more on the Dalai Lama via CDT.