Censorship and Surveillance in Xinjiang 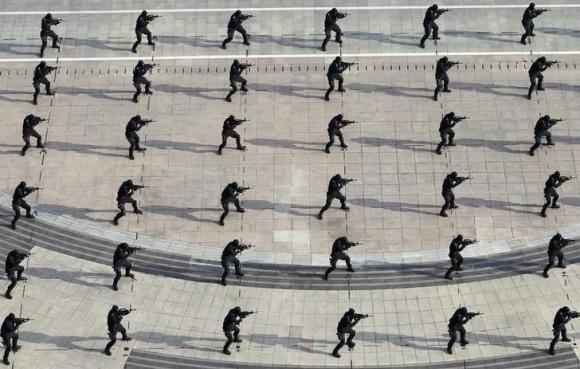 At The Los Angeles Times, Julie Makinen reports obstruction and harassment of reporters in Xinjiang amid China’s ongoing response to a series of deadly attacks.

[… E]ven as Chinese officials insist that this is a clear-cut battle against religious zealots and hard-core separatists, local authorities are making it difficult for anyone to independently question (or substantiate) that narrative. Outsiders inquiring about the scale or causes of the carnage in Xinjiang are unwelcome, and locals are discouraged from speaking freely about it.

That became abundantly clear on a recent Thursday when I and my assistant, our driver and guide suddenly found ourselves accompanied by two extremely persistent Xinjiang security officers who trailed us for hours and whose intimidating presence ensured that no one would talk openly to us.

China’s state-run media must follow the Communist Party line, but foreign journalists are supposed to be able to travel freely anywhere in the country except Tibet and interview anyone who consents.

In reality, though, authorities employ various tactics to stifle coverage. In a recent survey by the Foreign Correspondents’ Club of China, two-thirds of overseas reporters here said they had experienced interference, harassment or violence while attempting to report. [Source]

While obstructing independent information-gathering, Chinese authorities are building up their own intelligence capabilities in and beyond the region. From Reuters’ Ben Blanchard and Sui-Lee Wee:

The Xinhua state news agency said changes to the draft security law going through parliament were aimed at improving intelligence gathering and the sharing of information across government departments, while also enhancing international cooperation.

“Our country is facing a serious and complex struggle against terrorism,” Xinhua said.

[…] Some recent attacks in Xinjiang have pointed to serious intelligence failures despite a big security presence there, including a bomb and knife attack at a train station in April that happened as President Xi Jinping was wrapping up a visit to the area. [Source]

See more on surveillance efforts in Xinjiang via CDT.