Winning, and Watching, Hearts and Minds in Xinjiang 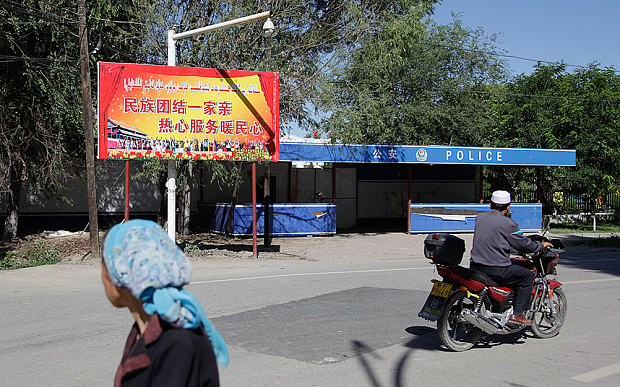 With tensions continuing to rise between local Uyghur residents of Xinjiang and Han authorities, a series of recent violent incidents have killed dozens, perhaps hundreds, of people. Meanwhile, authorities continue to employ harsh tactics to crack down on what they deem “separatist” behavior. Now a new program promises a softer approach to “win the hearts and minds” of Uyghurs by sending hundreds of thousands of Party officials to rural regions to interact with the local population. But as Tom Phillips reports for the Telegraph, the plan also includes a more sinister purpose:

“The basic idea is to visit families, build unity and bring them benefits,” said one of the 12 officials in Bayandai village. “It is a project to win people’s hearts and to improve the local economy and people’s lives.”

But there is also a second, largely unspoken task for the team, and for the rest of the officials who are fanning out across 8,000 villages in Xinjiang: to gather intelligence on the lives of the villagers and create a vast community surveillance network in this huge and troubled region.

“Nominally they are there to listen to the people,” said Dr James Leibold, a specialist on China’s ethnic policy from La Trobe University in Australia. “But one of the things they have also been tasked with is surveillance.”

The teams have been told to interview each household in their village and compile detailed reports on their employment status as well as on their observance of Islam, noting down, for example, whether the women wear veils and the men have beards. [Source]

According to the Telegraph report, the plan would, “help thwart terrorist activities and extremist thought.” China has blamed the recent violence on the rise of religious extremism from abroad, but other observers believe it is an extreme response to systematic government repression of the Muslim minority group.

While evidence of sustained links between global jihadist groups and Uyghurs in Xinjiang remains sketchy, some jihadist groups have condemned the Chinese government’s treatment of Uyghurs. A publication affiliated with Al Qaeda recently called Xinjiang “occupied Muslim land”, calling for it to be “recovered [into] the shade of the Islamic Caliphate.” James Griffiths reports for the South China Morning Post:

Produced by the jihadist organisation’s As-Sahab media wing, the 117-page debut issue of Resurgence includes a feature titled “Did You Know? 10 Facts About East Turkistan,” referring to the name for Xinjiang used by those who advocate independence from China.

While much of the article is inaccurate – it claims, for example, that teaching the Quran is illegal in China (Islam is one of the country’s five recognised official religions) – it shows how China’s actions in the region, such as encouraging the migration of Han Chinese into Xinjiang and restricting religious dress, are being used by jihadist organisations to confirm their belief that Muslims are under threat.

[…] “In recent years [jihadist organisations] have expressed an interest in the alleged oppression of Xinjiang Uygurs by the Han Chinese,” Ahmed Hashim, a terrorism expert and associate international studies professor at Singapore’s Nanyang Technological University, told the South China Morning Post. “China is being seen as an oppressive power as it grows in strength.” [Source]

In July, the leader of the Islamic State gave a speech in Iraq in which he vowed to get revenge on a number of countries, including China, which had “seized Muslim rights.”

Read more about Xinjiang, Uyghurs, and violence in the region, via CDT.