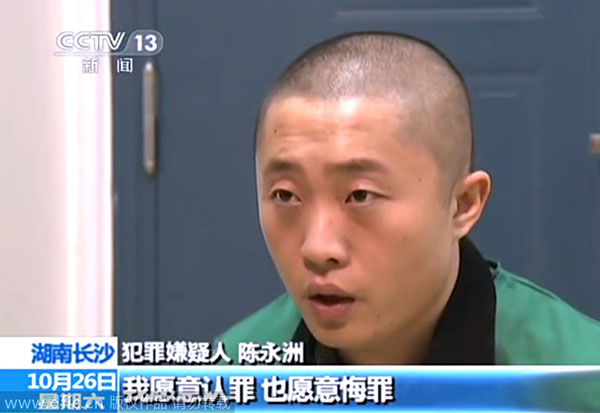 A court in Changsha, capital of central Hunan province, has found Chen Yongzhou guilty of “fabricating and spreading falsehoods to damage the business reputation of others”, state news agency Xinhua reported.

Last year, Chen published stories in New Express, a state-backed tabloid based in the southern city of Guangzhou, alleging that Zoomlion Heavy Industry Science and Technology had engaged in sales fraud, exaggerated its profits and used public relations to defame its competitors.

Zhuo Zhiqiang, who co-authored some Zoomlion stories with Chen, was sentenced to 10 months in jail and fined 10,000 yuan. [Source]

Following his arrest last year, Chen appeared on state television to confess that he had accepted bribes for fabricating stories on the company. A management reshuffle was ordered at New Express following its public pleas for Chen’s release. Chen’s case subsequently sparked debates in China about media ethics and corruption. At China Media Project, David Bandurski examines Guangming Daily to ascertain whether Chinese authorities are serious in their efforts to stem corruption within the news industry:

[…] Can we really assume the authorities are serious about media corruption? Do the recent purges and televised confessions really signal a renewed determination to tackle media corruption?

I have my doubts. Let me show you why.

If you’d begin by opening up Guangming Online, the state-run website operated by Guangming Daily, a newspaper published by China’s Central Propaganda Department. Now, if there’s any media interest that should run a tight ship from the standpoint of news and ideology, it’s the Guangming Daily. You wouldn’t expect a media group run by the Central Propaganda Department, the supreme authority on what content is proper or improper in China, to be crossing any lines.

[…] Now, move past the top three headlines on the news section, probably about Xi Jinping and Li Keqiang and then randomly select a headline. When I visited last, it was this story about the public reappearance of North Korean leader Kim Jong Un. On the right-hand side of the news article — mine a video by China Central Television — you can find all manner of click-bait designed to generate traffic for the site. And you will probably find plenty of images of partially clothed young women under the category “Great and Hot Photos.”

[…] This online news page, with its bawdy juxtaposition of political hardlines and female softlines, sums up the status quo in China’s media perfectly well. [Source]

See more on media corruption from CMP via CDT.