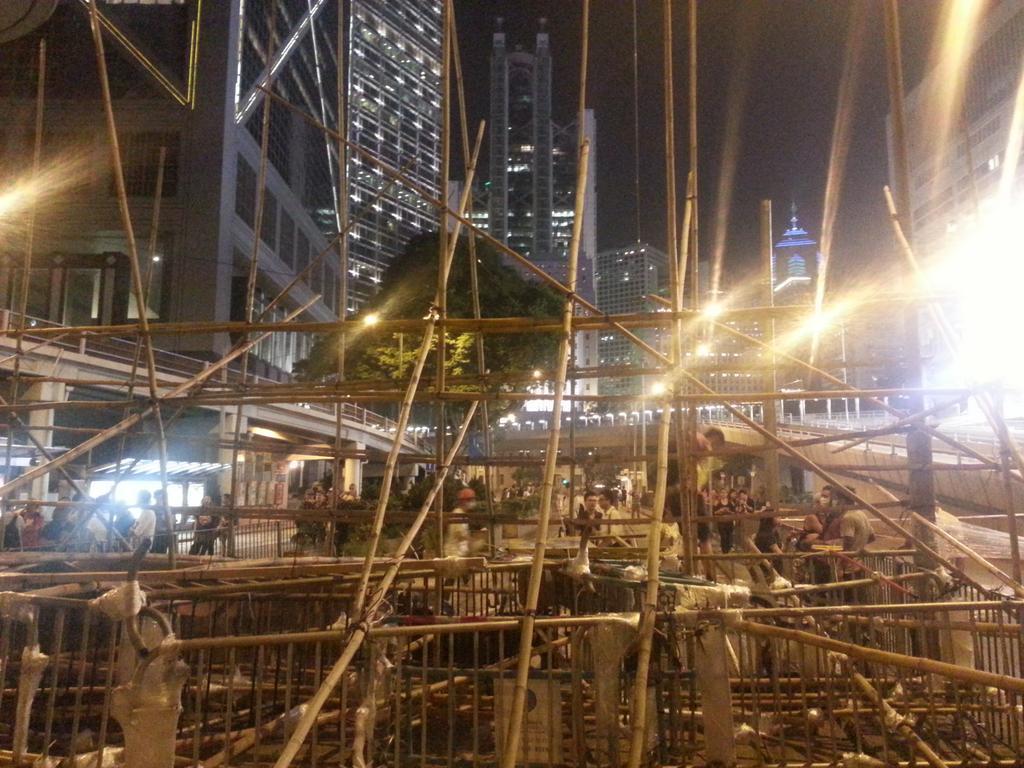 Hong Kong police have cleared a number of protest sites in the city, removing the increasingly elaborate barriers erected in response to earlier efforts. The makeshift fortifications included everything from cling film, wire and rubbish bins to iron chains and cement, with a bamboo skeleton provided by sympathetic construction workers. From Keith Bradsher at The New York Times:

Eric Wu, a 37-year-old construction worker, has spent his entire adult life building and climbing bamboo scaffolding as high as 50 floors above the ground.

But on Monday morning, he used his talents to pursue a different goal — lashing together two-inch-thick bamboo poles in an elaborate lattice that he designed to protect an encampment of pro-democracy student protesters here. The lattice was a yard high, about 20 feet wide and 30 feet deep, and blocked a road near the Hong Kong Police Headquarters.

[…] Mr. Wu’s labors brought together one of China’s oldest traditions — bamboo scaffolding — with Hong Kong’s widespread aspirations for democracy, particularly among the young, and a dissatisfaction with the local economy among blue-collar workers.

[…] Mr. Wu began creating his bamboo barrier after the police, in a series of raids on protest encampments Monday, carted off many of the barriers of steel or super-hardened plastic that the students had been using. Most of these barriers actually belonged to the police, but the students had commandeered them when the police largely withdrew from the city center on Sept. 29. [Source]

Once the original barriers had been cleared, counter-protesters swept in. It remains unclear whether their actions were coordinated with those of the police, as many protest supporters have alleged. From The Washington Post’s Simon Denyer:

Tensions peaked about midday Monday as hundreds of people converged on the site demanding that the roads be reopened.

As the opponents chanted slogans against the sit-in, groups of men, many wearing surgical masks, rushed the barricades at both ends of Queensway, a wide street that runs through Admiralty district.

[…] “Open the roads,” chanted dozens of people unhappy with the sit-in, accusing the students of being tools of the West and not “real Chinese.”

“Don’t let them pass,” the pro-democracy demonstrators replied, accusing their opponents of not being Hong Kong natives. “Go back to the mainland,” they chanted. “Speak Cantonese.” [Source]

The subsequently rebuilt barriers were short-lived, as the AFP’s Jerome Taylor and Dennis Chong reported:

Around 150 police dismantled metal barricades at the Causeway Bay site before dawn Tuesday, an AFP journalist at the scene saw, freeing up traffic in one direction but leaving the protest camp there largely intact.

Hours later another contingent of officers hit barricades at the main Admiralty site, using chainsaws to slice through bamboo poles that had been used to reinforce protest cordons following a similar attempt to remove them on Monday.

Some protesters were seen sobbing.

“We are only residents and students,” one tearful young woman shouted at police. “We will leave as we are unable to fight you, but we will not give up.”

[…] Police told reporters that the operation was limited to removing barricades along key traffic routes and that the democracy campaigners would still be given space to express their views. [Source]

The rise and fall of the bamboo barricades was documented on Twitter:

Last night against the Hong Kong skylight, a fortress of bamboo rises. pic.twitter.com/fsnDfph0vY

'If we do not wish to fight [the enemy] … throw something odd and unaccountable in his way' -Sun Tzu pic.twitter.com/qXHcI2qz7B (@frostyhk)

Barricades give the finger in #hongkong pic.twitter.com/Q5YJ2b4PnF

A bamboo barricade on Queensway in the mid morning light. pic.twitter.com/29nPIOPKnY

Hundreds of police making light work of one of the big outer barriers at the main #OccupyHK protest site. pic.twitter.com/GRD8TFyeSK

Protest leaders in #HongKong appeal to angrier students to calm down, restrain one of the most furious pic.twitter.com/5YDaTMGt5j

Chainsaws and shears used to break through barricades in Admiralty. pic.twitter.com/jKF9K3Xxj2

Police out in big numbers dismantling a number of barricades on Queensway. #OccupyHK pic.twitter.com/tM3lOYigWG

A massive show of force. Police making sure demonstrators can't get back on to Queensway. pic.twitter.com/cDAA9qePyg

Police carry away Hong Kong universal suffrage sign to the trash, as they tear down democracy protest barricades @AFP pic.twitter.com/EcvoZ87FqR

Almost 5pm and police are maintaining their cordon to entrance to queensway rd.Protesters have been sitting for hours pic.twitter.com/Da71SZsnzk

The pattern repeated when protesters repelled police and barricaded a tunnel on Lung Wo Road, only to be swept away hours later with 45 of their number arrested. From Jacky Wong, Enda Curran and Chester Yung at The Wall Street Journal:

The confrontation came as police stepped up efforts to clear roads that have been blocked since Sept. 28. Protesters late Tuesday night flooded into a tunnel near the government headquarters, the center of the protesters’ territory, halting traffic and surrounding a small group of police officers. Police retreated and protesters built barricades with concrete stones meant to cover storm sewers.

The tunnel had been open to traffic for most of the occupation, and police demanded it be reopened. Hours later, police returned with a larger force and retook the tunnel, arresting several protesters and removing barriers. Protesters were being led out of the tunnel with their hands tied with plastic cuffs and traffic began to flow again.

[…] A person familiar with the police strategy said it was a “piece-by-piece” approach with the purpose of avoiding the use of force. “If the police can take down or clear areas without using excessive force, they will do it,” the person said. [Source]

Other reports suggested less restraint by police, however. From AFP’s Jerome Taylor:

Ben Ng, an 18-year-old student, was with protesters near a newly built barricade when the baton-wielding contingent approached. “Police used pepper spray without any threat or warning. Protesters were beaten by police,” he said.

“Both protesters and police, their emotions are very unstable.

“The government doesn’t want to talk to us and we don’t know why. We hope to start talks again as soon as possible because protesters are very tired at this moment.”

[…] Daniel Cheng, a reporter for an online news portal, told AFP: “(Police) grabbed me, more than 10 police, and they beat me, punches, kicks, elbows. I tried to tell them I’m a reporter but they didn’t listen.” [Source]

Additionally, Civic Party member Ken Tsang Kin-chiu reportedly endured a sustained beating by police. A police spokesman responded that “even though protesters raised their hands in their air it does not mean it was a peaceful protest.” Some officers, he claimed, had been kicked or attacked with umbrellas.

As before, the events were covered as they unfolded on Twitter:

New Barricades being built on west side of tunnel near entrance to chief executives officr pic.twitter.com/0zRZgIey5U

Riot police left the tunnel. For now. Umbrellas and masks back. Some reinforce barriers during commotion. #OccupyHK pic.twitter.com/TYjHTzj4AI

On west end of the now-blockaded tunnel outside Chief Executive office in Admiralty, protesters put up barricades. pic.twitter.com/mn5i28KtFm

East end of the tunnel on Lung Wo Road, in Admiralty, is also being blockaded as protesters move in barricades. pic.twitter.com/564dMOAgjK

Protester brought a homemade shield. "Theirs are plastic, ours are wood." pic.twitter.com/JSJvVSvds1

Running out of fences for barricades, protesters rip up concrete sides of the tunnel, lay them out neatly, Hong Kong pic.twitter.com/Bu954JCO4T

Protesters finished tunnel (bit like jenga, but lower/longer) now discuss tactics on what to do when police come back pic.twitter.com/FQqp06NX1s

One constant of HK umbrella movement, regardless of what's happening, somebody nearby is sleeping under an umbrella pic.twitter.com/2PqB22tiJ1

Police face off with barricade, protesters behind umbrellas. hong kong 3 am pic.twitter.com/HZexBexXKw

Tense standoff between protesters and police begins, much shouting from both sides. pic.twitter.com/WZayrBIBi1

Umbrellas are out as police breach the barricades pic.twitter.com/j2TnO8YiH7

Protesters ready under umbrellas for police to move on them Hong Kong pic.twitter.com/261a3840Yr

Line surged forward again, protesters driven back, shots of pepper spray being fired at those who lag behind/resist pic.twitter.com/B1HwJbYW9D

Police have reclaimed the western part of tunnel with ferocious intensity. The students victory few hours ago a distant memory

It's pitch black. Chaos. Only thing you can see are police lights. Screaming + hiss sound of pepper spray discharged pic.twitter.com/yzZURGYASb

Absolute chaos as police advance on all sides, use pepper spray lashing out at everybody Hong Kong

Students have been pushed back to their earlier positions before the tunnel raid.Police are formed butnot crossing in pic.twitter.com/xJUOIo4jjw

A lull in the fighting now as police have retaken the tunnel and are now standing watch over admiralty camp. Lines are just meters apart

Police are clearing barricades and making arrests. Journos that stick around to film get threatened with pepper spray pic.twitter.com/TdgyFoLQ8o

Under the arc of the government headquarters, dozens of officers keep a close eye on protesters at Tamar Park. pic.twitter.com/w1gphVWrN3

A democracy protester with his hands up gets pepper sprayed in the face by a policeman in Hong Kong @AFPphoto pic.twitter.com/HJeEN6lGmb

So quiet on Hong Kong barricades now people are snoring. This girl is writing "Fight for democracy" pic.twitter.com/QUqxf9w3xX

Sequence of pictures before and after this protester got pepper sprayed, as police advanced this morning in Hong Kong pic.twitter.com/Gq9q5CFjWQ

TVB News says several policemen carried this handcuffed protester to a dark corner and beat him for about 4 minutes. http://t.co/fKkk1cTIMT

Another @Alex_Ogle pic on this story: protester getting pepper-sprayed by at least 3 cops http://t.co/AcGwheij2A

At Bloomberg View, Adam Minter suggested that a spiral of repeated entrenchment and removal could squander what gains the protesters have made, writing that “this might just be the moment for them to declare victory and go home.”

True, the government has refused to make even symbolic concessions to the protesters, who have been demanding the resignation of the city’s current leader, Leung Chun-Ying, and a more open system for electing a new chief executive in 2017. Still, for more than two weeks now, student-led crowds have displayed remarkable discipline and resilience as they’ve peacefully shut down some of the busiest commercial neighborhoods on the planet. They’ve clearly won the global publicity battle over Beijing, and have developed extremely useful organizing capacity that can be deployed again in the future.

[…] The end of the protests will certainly strike many as a disappointment, and perhaps even a debacle. But that’s to miss how thoroughly the students have altered the debate about Hong Kong’s relationship to China. Opposition turns out to be deeper and younger than many – including China’s Communist rulers – ever imagined. Going home peacefully won’t change that message. In fact, by staging a tactical retreat now, protesters will only enhance their standing in advance of the political battles to come. [Source]