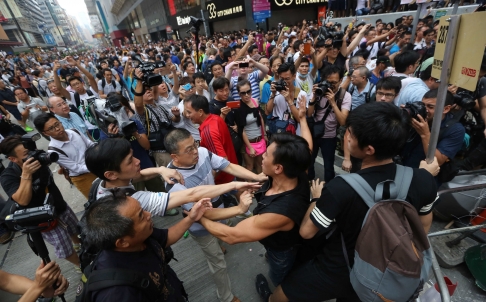 As ongoing protests ebb and flow in Hong Kong, supporters on the mainland are being detained by the dozens. Human rights activists say that between 50 and 100 people have been detained and while some have been released, others have not. Family members of those detained have now issued a public statement, circulating on social media, calling for their release. Didi Kirsten Tatlow writes for the New York Times:

According to estimates by activists and foreign diplomats, between 50 and 100 people have been detained — some subsequently released but others held — in mainland China since the “Occupy Central With Love and Peace” demonstrations began in Hong Kong in late September. Some of the detained had shaved their heads in support, others held up placards in public. Still others had distributed information about the protests on social media, and others were held in connection with a poetry and art event in support of the demonstrations in the village of Song Zhuang in Beijing in early October.

The Chinese government has made clear in commentaries in People’s Daily, the Communist Party’s newspaper, and other state-run media that it regards the demonstrations as a “color revolution” fomented by “foreign forces.”

But the sweep was described by one art critic visiting Beijing from another major city, Xi’an, as a “red terror,” in a reference to extralegal behavior by the Communist Party authorities. She asked for anonymity because of the political sensitivity of the issue.

“We don’t know what is the meaning of ‘picking quarrels and provoking trouble,’ we just know that they are core members of each family, that they help shoulder heavy burdens, are good to their neighbors, respect the elderly and children, and work for the happiness of others,” read the families’ statement, issued Saturday. On Monday, the statement was circulating on Weixin, or WeChat, a favored method of communicating in China. It was not immediately clear how or when the appeal was passed to the Chinese authorities. [Source]

Last week, Andrew Jacobs of the New York Times reported on a poetry reading in Beijing that became a police target in the crackdown:

The most recent arrests took place in and around Songzhuang, an artists’ enclave on the outskirts of the capital and the setting for an Oct. 2 poetry recital that drew the attention of security officials. According to several artists and lawyers for those detained, seven of those taken into police custody had attended the poetry event, including an art curator and a Chinese news assistant employed by a German newspaper.

Several people were detained when the police arrived to break up the gathering, while others were taken away the following day.

Among those arrested in recent days was Wang Zang, a poet and performance artist whose work is often politically provocative.

His wife, Wang Li, said he was probably singled out after posting on Twitter a photograph of himself, head shaved and holding out an umbrella, his middle finger raised in defiance. At his back was the national flag of Taiwan, the self-ruled island that China claims as its own. [Source]

Two women who were detained were reportedly targeted because they had provided media interviews while attending a pro-democracy march in Hong Kong on July 1. From AFP:

The vague charge of “picking quarrels” has been increasingly used by Chinese police to hold human rights lawyers and activists in recent months.

In July, Zhang and Li spoke in Hong Kong to foreign media affiliated with the Falun Gong spiritual movement, which is banned on the mainland, as they took part in a pro-democracy march that drew tens of thousands of people.

Zhou added that their detentions were related, saying: “Before the arrest Li Lirong was questioned by the police, and they specifically mentioned the Hong Kong interview she had given.” [Source]

See a list of those detained for supporting the Hong Kong protests, and more details from Chinese Human Rights Defenders.