Ferguson: “No Such Thing as Perfection” in Human Rights 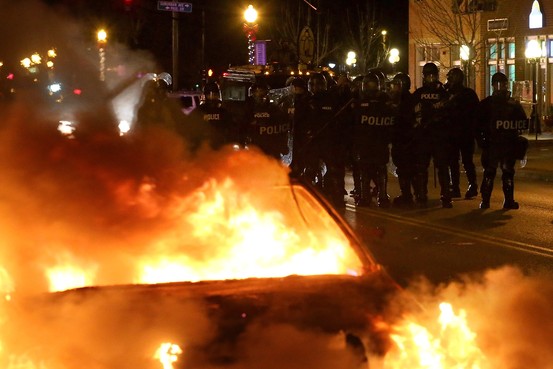 At the daily media briefing on Tuesday, when an American reporter asked about the unrest and whether the Chinese government would comment given past U.S. criticisms of China’s human rights record, Ms. Hua first stuck to the script.

“The case you mention is a U.S. internal affair. As the spokesperson of the Foreign Ministry I will make no comment on that,” she told reporters. Then, she went further.

“But I would like to say that there’s no such thing as perfection when it comes to human rights regardless of whatever country you’re in,” said Ms. Hua. “We have to improve the record of human rights and promote the cause of human rights. We can learn from each other in this area.”

Despite the hint of schadenfreude from Ms. Hua, Chinese media—all of which ultimately answers to the country’s communist government—stuck to mainly factual reporting about the latest violence that erupted in Ferguson, which police responded to with tear gas and non-lethal shotgun rounds. [Source]

Despite claims that the Chinese government does not interfere in "internal affairs" of other countries, it does issue an annual human rights report on the United States, in response to a similar report written by the State Department which covers all U.N. member states, including China.

On Twitter, several people pointed out the similarities of an image from Ferguson on Monday night, in which a lone man stood with arms up in front of police vehicles, with the infamous "Tank Man" who appeared on Tiananmen Square on June 5th, 1989. From Laura Mandaro at USA Today:

On Twitter, some pounced on the comparisons between the two photos. The photo from the 1989 Tiananmen Square protests became a symbol of the pro-democracy movement, which China violently ended that year. The Michael Brown shooting has galvanized the civil rights movement, which has organized around the high rate of black arrests. [Source]

And from Tiananmen Square:

Translation: “What Can an Ordinary Person Do About the Xinjiang Crisis?”