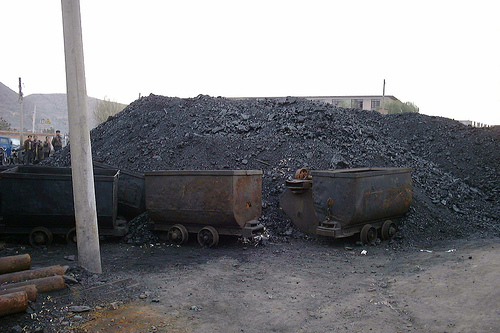 Following the announcement last month of an unprecedented deal between China and the U.S. to cut carbon emissions, both countries are now facing challenges associated with implementing the plan. In China, coal is deeply embedded into the country’s economy and has a strong hold on many local areas where it is plentiful as a natural resource and is the predominant source of heat. For AP, Jack Chang reports from one town in Tang County where citizens are worried about how weaning the country from its reliance on coal will negatively impact their lives:

Just a few dozen miles from the capital of Beijing, in Hebei province, coal use has long been a way of life here, with countless house-sized mounds of it dotting the forest floor. Yet the soot-covered residents of Tang County said they see change coming as Chinese leaders pledge to cut back on the kind of rampant coal use that has made this country the world’s biggest emitter of greenhouse gases.

Already, Beijing and other Chinese cities have been phasing out coal burning in an attempt to rein in clouds of toxic smog. With much of Beijing’s pollution originating from surrounding provinces, Zhao Wei, who works at a coal distributor in Tang County, said it is only a matter of time before those same coal controls hit families here who depend on what remains the cheapest form of heat and energy available.

“If we don’t burn coal, what are we going to do?” Zhao asked as his neighbors shoveled coal into grinders and burlap bags. “How will we stay warm in the winter? This will only affect the common people.” [Source]