Annoyance With North Korea Bubbles to the Surface 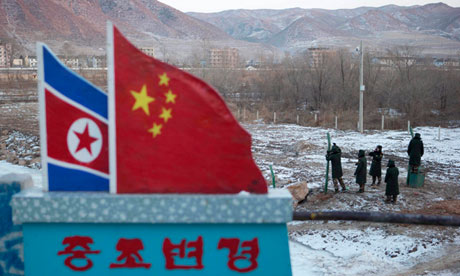 While members of the Chinese public have been questioning Beijing’s alliance with North Korea for some time, Jane Perlez sums up a recent debate that unfolded in the pages of state media suggesting that some in China’s military are also uneasy with supporting the hermit kingdom:

“China has cleaned up the D.P.R.K.’s mess too many times,” General Wang wrote in The Global Times, using the initials of North Korea’s formal name, the Democratic People’s Republic of Korea. “But it doesn’t have to do that in the future.”

Of the government in North Korea, he said: “If an administration isn’t supported by the people, ‘collapse’ is just a matter of time.” Moreover, North Korea had violated the spirit of the mutual defense treaty with China, he said, by failing to consult China on its nuclear weapons program, which has created instability in Northeast Asia.

The significance of General Wang’s article was given greater weight because he wrote it in reply to another Global Times article by a Chinese expert on North Korea, Prof. Li Dunqiu, who took a more traditional approach, arguing that North Korea was a strategic asset that China should not abandon. Mr. Li is a former director of the Office of Korean Affairs at China’s State Council.

In a debate that unfolded among other commentators in the pages of Global Times, a state-run newspaper, after the duel between General Wang and Mr. Li, the general’s point of view — that North Korea represented a strategic liability — got considerable support. General Wang is known as a princeling general: His father, Wang Jianqing, led Mao Zedong’s troops in the fight against the Japanese in Nanjing at the end of World War II. […] [Source]

While the Global Times pages recently showed at least a degree of official frustration with China’s longtime ally, they also devoted space to criticizing Hollywood for portraying a covert attack on Kim Jong Un in the shelved Seth Rogan film “The Interview,” and “U.S. society” for allowing its production:

Any civilized world will oppose hacker attacks or terror threats. But a movie like The Interview, which makes fun of the leader of an enemy of the US, is nothing to be proud of for Hollywood and US society.

Americans always believe they can jab at other countries’ leaders just because they are free to criticize or make fun of their own state leaders. Actually the countries targeted in Hollywood movies are very selective, such as the Cold War era’s Soviet Union, North Korea and Iran.

China used to be also portrayed in a negative light occasionally. Now that the Chinese market has become a gold mine for US movies, Hollywood has begun to show an increasingly friendly face, just in order to attract more Chinese viewers.

[…] No matter how the US society looks at North Korea and Kim Jong-un, Kim is still the leader of the country. The vicious mocking of Kim is only a result of senseless cultural arrogance.

The US society stands on the upper stream of global competition of culture. It needs to show some good manners instead of being too aggressive. The American elites should not just speak like gentlemen, but behave like them. [Source]

The hacking and accompanying threat of a “9/11-style” attack on theaters that premier “The Interview” caused Sony to cancel the film, much to the chagrin of many Franco/Rogan fans and President Barack Obama: “I think they [Sony] made a mistake. […] We cannot have a society in which some dictator someplace can start imposing censorship here in the United States.” After the FBI said they believed the attack to have been launched by North Korea and President Obama promised a U.S. response to North Korean cyberattacks, North Korea denied the allegations and took to characteristic saber-rattling. While North Korea’s connection to the web largely relies on China’s Internet infrastructure, the Obama administration has asked for Beijing’s part in a joint action to block state-sponsored hacking efforts. For Reuters, Megha Rajagopalan and Steve Holland report that, without acknowledging Washington’s request, China’s Foreign Ministry said that it opposes all forms of cyberattacks, but that evidence of North Korea’s responsibility for the Sony hit is inconclusive:

China said on Monday it opposed all forms of cyberattacks but there was no proof that North Korea was responsible for the hacking of Sony Pictures, as the United States has said.

“Before making any conclusions there has to be a full (accounting of) the facts and foundation,” foreign ministry spokeswoman Hua Chunying said. “China will handle it in accordance with relevant international and Chinese laws according to the facts.”

Also see earlier coverage from the New York Times, which sums up tension between the U.S. and China over cybersecurity and state sponsored cyberattacks.