Despite Crackdown, Corruption Seen as Worsening 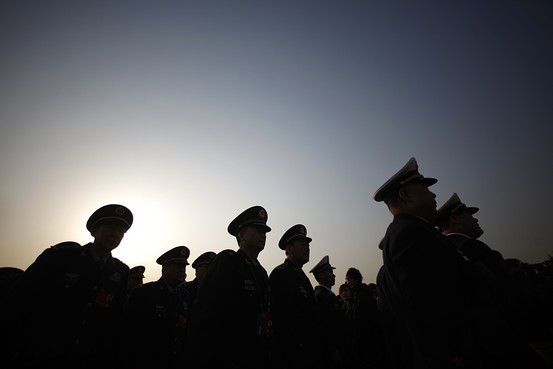 Despite Xi Jinping’s well-publicized anti-graft campaign that has led to the fall of numerous corrupt officials including former security czar Zhou Yongkang, who has been officially expelled from the CCP and arrested on graft-related charges, China’s position on Transparency International’s Corruption Perceptions Index has deteriorated in the past twelve months. Simon Denyer at The Washington Post reports:

The global anti-corruption watchdog Transparency International (TI), in its latest Corruption Perceptions Index found that China had tumbled farther down the list since last year’s report than any other country, dropping 20 places. It now occupies 100th place on the list, out of 175 countries surveyed.

TI’s rankings measure perceptions of corruption in each country’s public sector from a variety of different sources. China this year scored 36 points on a scale where 100 equals total purity. That means it is perceived as slightly more corrupt than places like Colombia, Egypt and Liberia. By contrast, this year’s least corrupt country, Denmark, scored 92. The most corrupt were North Korea and Somalia, which each scored 8. [Source]

At China Real Time, James T. Areddy writes that the anti-corruption campaign’s lack of transparency and the Xi administration’s ongoing crackdown on dissent are the primary reasons for China’s falling scores.

The watchdog said China’s falling score was largely because the anti-corruption campaign is taking place behind closed doors and because more broadly civil liberties are being impinged. In an index where 100 signifies a fully clean environment, China fell to 36 from 40 a year ago. That drop, which Transparency called statistically significant, pulled China down 20 spots to No. 100 of 175 nations, with a rank equal to Algeria and Suriname. The three nations placed behind a group that includes Egypt and Panama but ahead countries including Bolivia and Mexico.

“Country scores can be helped by open government where the public can hold leaders to account, while a poor score is a sign of prevalent bribery, lack of punishment for corruption and public institutions that don’t respond to citizens’ needs,” said a statement from Transparency.

The ranking suggests that Mr. Xi is failing to convince some members of the international community about the methods his campaign is using. Such doubts could undermine Beijing’s increasingly strong diplomatic effort to elicit assistance from foreign governments, in particular to help capture suspects who flee. [Source]

China’s anti-corruption campaign has, in some cases, been having the opposite of its intended effects. Russell Leigh Moses at China Real Time reports that some officials have been found to circumvent graft inspections through corrupt methods.

That’s the conclusion of a recent commentary on the website of the Party’s flagship newspaper People’s Daily, which noted that political bosses in some provinces have been looking to preempt Beijing’s ongoing inspections of local corruption by “waging a sudden offensive to appoint and promote favorites, family members, and other insiders.” Officials such as these, the newspaper contends, believe that elevating loyal followers, thereby binding them even tighter to the current leader, can thwart these anti-graft investigations.

For example, according to the essay, the party secretary of a county in Hunan province elevated more than 100 local officials as the crackdown on corruption gained momentum in his region.  In another county in Shanxi, the party secretary promoted over 400 cadres as a way of securing loyalty in the face of investigations.  “How is it, with numerous personal evaluations, collective decision-making committees and the like to ensure proper selection, are party officials able to get away with all these sudden promotions?” the commentary asks. “Why does the system fail?”

Chinese President Xi Jinping has won widespread praise for his anti-graft campaign, which has run longer and gone deeper than any in the Communist Party’s history. But the commentary, which appeared last Thursday, is another confirmation of just how difficult a task he faces. [Source]

The article, entitled “Who are the buyer and the seller?”, said graft-busters had identified three types of people who might try to buy positions – those who were eager for a promotion, those who wanted to be transferred from a poor unit or region to the rich one, and people outside government who wanted in.

The main sellers are senior officials, particular the top official in a region or a unit who has power over personnel matters. The No 2, and sometimes the third and even fourth-in-command, take bribes to help people get promoted.

Some borrowed from banks, while others sought sponsorship from businessmen who would reap the benefits after the official was promoted. Some used money obtained through bribes or other corruption. Buyers could also pay through instalments, just like a homeowner might pay their mortgage [Source]