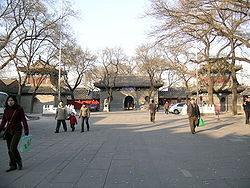 The Guangji Temple and Fire God Temple in Beijing were among the first to receive the certificates from the State Administration of Religious Affairs (SARA), which oversees religious organizations.

“There have been some non-religious sites employing fake monks who tricked tourists into donating money or buying expensive incenses,” Liu Wei, an official from the administration, said.

[…] China currently has some 33,000 Buddhist temples and more than 9,000 Taoist temples. Chinese authorities banned any act of profiteering from religious activities after the over-commercialization of temples and other sites in recent years. Temples seeking to raise funds by listing on the stock market was also banned. [Source]

The monky business has spread beyond China. The New York Times reported this summer on flocks of fake Buddhist monks found begging, sometimes aggressively, in Times Square and elsewhere around the city.