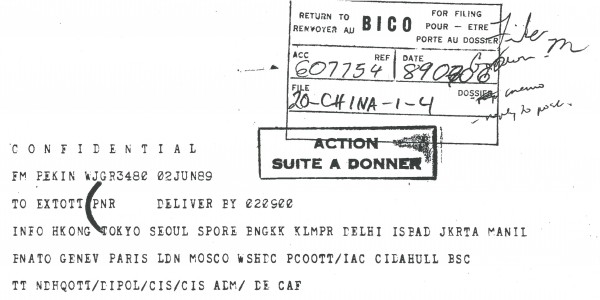 Library & Archives Canada has released thousands of pages of telexes transmitted from the Canadian embassy in Beijing in the days and weeks surrounding the June 4, 1989 military crackdown on protesters in the city. The messages describe a dire scene in Beijing following the violence; “The situation looks grim at best and potentially disastrous,” read one telex. Blacklock’s Reporter quotes from the messages:

“An old woman knelt in front of soldiers pleading for students; soldiers killed her,” the embassy reported; “A boy was seen trying to escape holding a woman with a 2-year old child in a stroller, and was run over by a tank”; “The tank turned around and mashed them up”; “Soldiers fired machine guns until the ammo ran out”. So many bullets were fired at Tiananmen “they ricocheted inside nearby houses, killing many residents,” the account continued.

“It may be years before the true story is known,” the embassy wrote; “The era of darkness may be long.”

In a June 7, 1989 message, diplomats wrote they were contacted by Chinese officials demanding to know if any dissidents had sought refuge in the embassy amid mass arrests of protestors. Staff estimated 10,000 people had been arrested in Beijing alone, including two employees of IBM who were jailed for sending faxes from the company’s office.

“They enquired whether the Canadian Embassy in Peking had been approached by Chinese students seeking asylum,” the Telex reads; “Officials are in a quandary how to respond as they fear that if the Embassy takes them in, soldiers could invade the premises and remove them.” [Source]

Read more about the 1989 protest movement and subsequent crackdown, via CDT.