“Little Cause For Optimism” in Shadow of Pu Zhiqiang Case 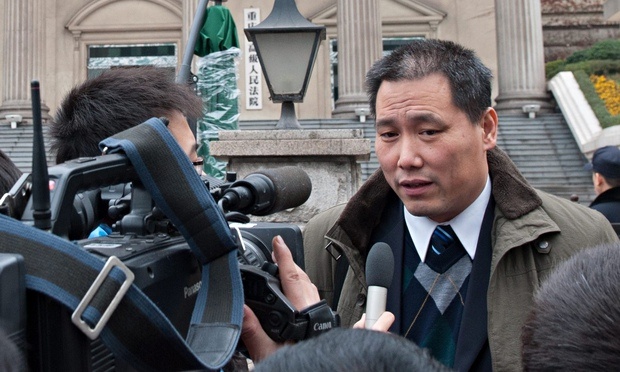 At The Guardian, rights lawyer Teng Biao writes that “China’s civil society has little cause for optimism in 2015,” focusing on the arrest and looming prosecution of his colleague Pu Zhiqiang:

Pu has a knack for hitting the nail on the head when analysing problems, and great foresight for larger issues. He is generous in aiding friends facing difficulties. Tall, handsome, with a strong voice, he fought evil with fury and righteousness in court. In a democratic system, he would have been a charismatic leader.

[…] He attributed his ability to avoid persecution to his understanding of politics and his tact. He was so deeply moved by The Lives of Others, a film about the work of the secret police in East Germany, that he purchased many copies of the DVD and handed them out to secret police, hoping this would help them to retain a shred of their humanity. When they illegally put him under house arrest he still tried to calmly reason with them, knowing that to a certain degree these people who did evil things were also victims of the system.

[…] Despite the pressure, civil society in China is prepared to fight for its survival and growth. There will be detours, setbacks, low points and sacrifices, and more people such as Pu will pay a high price. But the motivation for this harsh crackdown is also the evidence that it will not stop China from moving towards becoming a free, democratic country. [Source]

Teng’s article includes a brief description of the breadth of sensitive cases with which Pu was involved. Pu’s own case also exemplified the current crackdown for Chang Ping, writing earlier this month at Deutsche Welle. From a translation at China Media Project:

The arrest and expedient trial of Beijing lawyer Li Zhuang shocked the legal community in China at the time. The eventual fall of Bo Xilai in one of China’s most high-profile corruption cases ever was applauded by the same legal community. What no one had predicted was that rights defense lawyers in China would fare even worse under President Xi Jinping, and that the media would likewise be put in a chokehold.

However one chooses to view it — in terms of the degree of repression involved, or in terms of the absurdity of the charges — the Pu Zhiqiang case today is far more shocking than the Li Zhuang case ever was in Bo Xilai’s Chongqing. Pu Zhiqiang, who through skillful debate, ingenuity and drama, defended the likes of Tan Zuoren (谭作人) and Ai Weiwei (艾未未), is now locked up behind bars, incriminated by his own words (因言获罪).

What we should find especially concerning is that Pu Zhiqiang’s own defense lawyer, Qu Zhenhong (屈振红) has also been detained. This being the case, it’s difficult to imagine anyone else daring to step forward to defend this defender. It took courage enough in the present climate to extend birthday wishes to Pu Zhiqiang on Weibo. [Source]

Human Rights Watch called on Friday for Pu’s release, as well as that of lawyer Guo Feixiong and scholar Guo Yushan:

There is no publicly available credible evidence of illegal behavior in any of their cases, yet all three are likely to advance in the coming weeks as judicial personnel handle these cases with instructions from Communist Party authorities.

“Under Xi Jinping’s leadership, the crackdown on dissent has netted some of China’s most respected critics known for their innovative activism developing the rule of law,” said Sophie Richardson, China director. “Prosecuting and imprisoning these well-established public figures indicates near-zero tolerance for independent activism.”

[…] All three focused on social issues recognized to be important by the government, including the rule of law, the fight against corruption, and inequality. All have carefully and painstakingly adhered to peaceful and lawful means in their activism. During a demonstration in January 2013 against the censorship of Southern Weekly, Guo Feixiong ensured the demonstrators did not block the gate of the publication, the road, or the pedestrian path, and that they left the demonstration promptly by the end of the workday.

“For years activists could mostly predict what kind of work or degree of pressure on authorities would eventually get them into trouble,” Richardson said. “But if these experienced and skillful moderates are prosecuted for their work, all bets on where the repression ends appear to be off.” [Source]

HRW went on to describe “procedural violations that are so blatant as to appear politically sanctioned,” and noted that Guo Yushan’s defense lawyer Xia Lin, like Pu’s, has also been detained. Both Xia and Qu have in turn been denied access to their own defense lawyers.

Joshua Rosenzweig recently highlighted the targeting of lawyers at ChinaFile:

[…] Chinese lawyers enter the courtroom knowing that trials in their country are not conducted on a level playing field. In many cases, they find that the prosecutor is not their only adversary and that they are also faced with judges who ignore procedures, restrict the scope of debate, or limit the amount of time available to present defense arguments.

This environment has contributed to growing tension and conflict between judges and lawyers, especially lawyers who feel a moral responsibility to challenge hypocrisy and injustice within the country’s legal system. Sometimes, these conflicts escalate into heated arguments or lead lawyers to disrupt trial proceedings by refusing to speak or leaving the courtroom in protest. Lawyers risk losing their right to practice by pursuing such tactics, but many do so anyway to signal their refusal to be part of unfair judicial processes that fail to protect individual rights.

The authorities now appear to be raising the stakes even further, with a recent proposal to amend Article 309 of the Criminal Law that would make “insulting, defaming, or threatening a judicial officer” and “engaging in other acts that seriously disrupt the order of the court” subject to up to three years’ imprisonment. Many lawyers have interpreted the proposal as an attempt to “gag” them. More than 500 to date have signed an open letter (which I have translated below) calling on the National People’s Congress Standing Committee to reject the proposed provisions. Though tiny relative to the total number of registered lawyers in China, this collection of signatures nevertheless demonstrates a strong degree of professional solidarity extending well beyond those lawyers who identify themselves as human rights lawyers and reflects a common concern for preserving the rights of lawyers in China’s legal system. [Source]

Read more on the crackdown on rights lawyers from Frances Eve at ChinaFile and at CDT, and on the precarious standing of China’s lawyers more generally from Tian Wenchang at Caixin.