News and Propaganda Resolutions for 2015 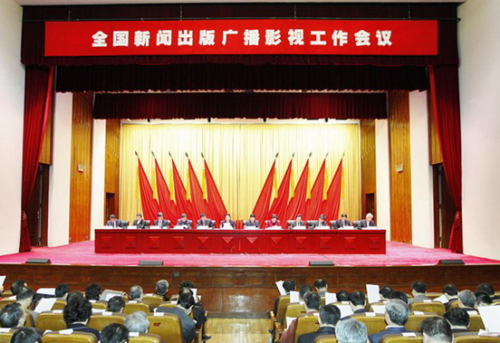 China Media Project’s David Bandurski examines a series of national meetings of Chinese propaganda officials since the New Year. On the whole, these restated and reinforced the propaganda apparatus’ traditional priorities, though with a relatively new emphasis on the words of Xi Jinping.

Presiding over the [National Press, Publications, Radio, Film and Television Work Conference] was Cao Fuchao (蔡赴朝), deputy minister of the Central Propaganda Department and Party chairman of the government office with China’s most ill-conceived acronym, the General Administration of Press Publications Radio Film and Television (GAPPRFT) [aka SAPPRFT, the S standing for State] — which, spoken properly, should sound like blowing a raspberry.

In reviewing work in 2014, Cai Fuchao pointed out that over the past year, the front line [forces] in news, publishing, radio, film and television had raised the banner high, firm in their faith [in the socialist cause], deeply studying and implementing the spirit of the series of important speeches by General Secretary Xi Jinping, ensuring that various work initiatives developed in a healthy manner along a correct path; they dared to take up [their work], overcoming difficulties, solidly advancing the deepening of reform …

The men and women on the front lines of Chinese propaganda were, in other words, good soldiers. They fought the hard fight for public opinion control. And, through and through, they “adhered to the center” and “achieved new results in serving the overall situation.”

[…] As I’ve argued elsewhere, the internet and social media are now the heart of information control in China, and it is possible that both the Central Propaganda Department and GAPPRFT are now being marginalized in favor of the Cyberspace Administration and its chief, Lu Wei (鲁炜). [Source]

Read more on SAPPRFT, Lu Wei, and propaganda in general via CDT.