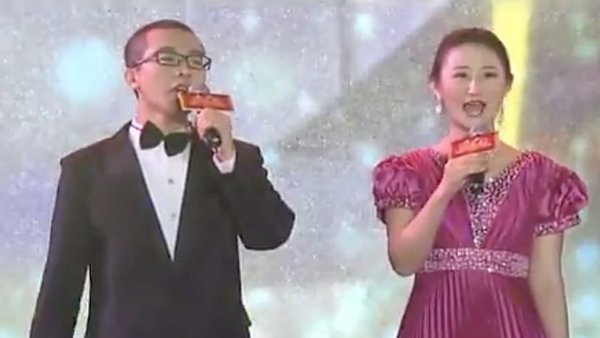 Amid a crackdown that has seen WeChat accounts and websites shuttered, real-name registration rules tightened, and the disruption of VPN services, China’s Internet censors at the Cyberspace Administration of China (CAC) have sung their own praises in an anthem lauding the benefits of their policies. Paul Mozur at the New York Times describes the performance:

During the talent show portion of a Lunar New Year celebration held on Tuesday by the Beijing Internet Association and attended by many of the country’s leading media figures and Internet executives, the Cyberspace Administration debuted what can only be described as a semiofficial anthem.

A throwback to revolutionary songs glorifying the state, the piece uses rich, if mixed, metaphors to boast of China’s influence over the Internet and its innovative prowess. To a bombastic battuta that sounds a bit like a military march, employees at the Cyberspace Administration, who reportedly worked overtime to practice the song, belted out memorable lines like, “Unified with the strength of all living things, Devoted to turning the global village into the most beautiful scene” and “An Internet power: Tell the world that the Chinese Dream is uplifting China.”

Though other media organizations and companies gave their own performances, media reports of the event unanimously dubbed the Cyberspace Administration’s song the winner. [Source]

Tania Branigan at the Guardian explains that the anthem comes as both foreign and domestic critics have expressed concern that the government’s crackdown on the Internet could severely impact the global business climate and communications:

The video emerged as the European Chamber of Commerce warned that increased censorship was isolating China from the rest of the world and could turn its domestic networks into an intranet. In an unusually strong statement, following a survey of its members, it said that restrictions were damaging business and discouraging investment and expansion in China.

Jörg Wuttke, president of the chamber of commerce, said in the statement: “Excessive tightening of internet controls can choke business growth and stifle investment in technology and R&D, areas which are crucial for China’s development … These measures are also discouraging much-needed foreign talent from relocating here. Restricted access to key internet tools is not merely an unfortunate inconvenience for individuals, it is an increasingly onerous cost of doing business here that many companies are finding harder to bear.”

He added: “We know from extensive conversations with the Chinese public and the private sector that many domestic companies are just as frustrated as our members.” [Source]

The Wall Street Journal’s China Real Times blog has translated the lyrics of the song and Tech in China added them to a Youtube version:

China Copyright and Media has provided an alternate translation.

Videos of the CAC performance were removed from the Internet soon after they were posted, leading the New York Times to ask, “Can China now claim to have censored the online celebration of its own Internet censorship agency?”

For an alternate perspective on Internet censorship, see Ai Weiwei’s anthem, the Song of the Grass-Mud Horse: