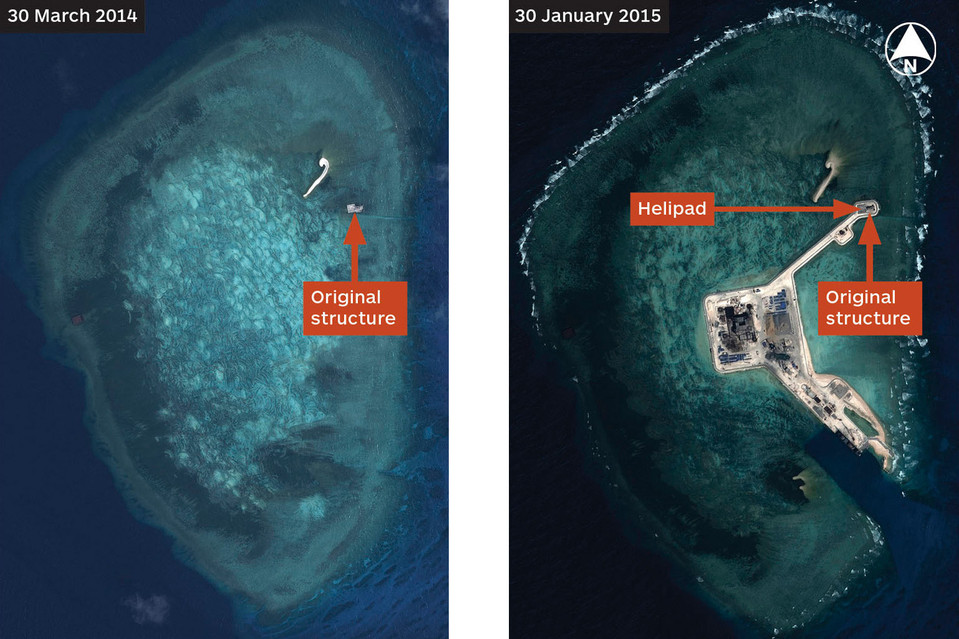 According to satellite images released Thursday, China has expanded the construction of artificial islands atop disputed reefs in the South China Sea. Jeremy Page and Julian Barnes at The Wall Street Journal report:

The images provide the first visual evidence that China has built an artificial island covering 75,000 square yards—about 14 football fields—and including two piers, a cement plant and a helipad, at a land formation called Hughes Reef, according to experts who have studied the pictures. The reef, which is above water only at low tide, lies about 210 miles from the Philippines and 660 miles from China.

The pictures, taken by a commercial satellite division of Airbus Group and released by IHS Jane’s, a defense intelligence provider, also show that China has made significant progress in building similar infrastructure in two other places, Johnson South Reef and Gaven Reefs, where Beijing’s territorial claims overlap with those of its neighbors.

China appears to be building a network of island fortresses to help enforce control of most of the South China Sea—one of the world’s busiest shipping routes—and potentially of the airspace above, according to experts who have studied the images.

The pace and scale of its South China Sea buildup shows that Beijing, despite having recently reined in its rhetoric and avoided confrontations at sea and in the air, hasn’t tempered its ambitions to project power in the region. [Source]

The rapid island buildup is seen by some as an indication of China’s desire to extend its reach in the South China Sea, creating concerns over a possible escalation of territorial disputes in the region. Greg Torode at Reuters reports:

China’s creation of artificial islands in the South China Sea is happening so fast that Beijing will be able to extend the range of its navy, air force, coastguard and fishing fleets before long, much to the alarm of rival claimants to the contested waters.

[…] While the new islands won’t overturn U.S. military superiority in the region, Chinese workers are building ports and fuel storage depots as well as possibly two airstrips that experts said would allow Beijing to project power deep into the maritime heart of Southeast Asia.

“These reclamations are bigger and more ambitious than we all thought,” said one Western diplomat. “On many different levels it’s going to be exceptionally difficult to counter China in the South China Sea as this develops.”

[…] Beijing has rejected diplomatic protests by Manila and Hanoi and criticism from Washington over the reclamation, saying the work falls “within the scope of China’s sovereignty”. [Source]

See Asia Maritime Transparency Initiative for a detailed look at various construction and land reclamation work that has transformed islands in the South China Sea. Also see prior coverage of territorial and maritime disputes, via CDT.