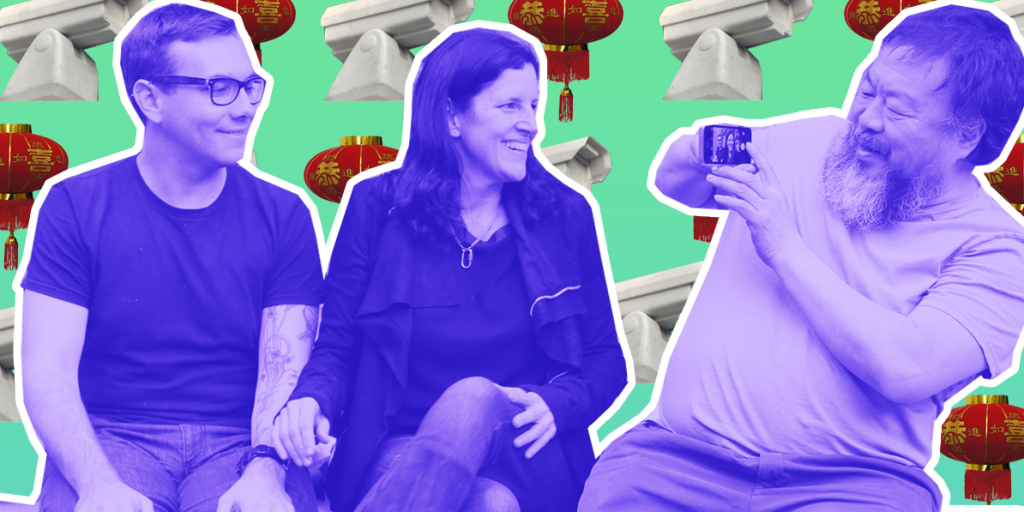 At Fusion, Kashmir Hill records the meeting in Beijing of outspoken Chinese artist Ai Weiwei, filmmaker Laura Poitras, and security technologist Jacob Appelbaum. Poitras was chosen by NSA leaker Edward Snowden as one of his first contacts, while Appelbaum worked with Wikileaks and is now a developer of the Tor anonymity and privacy tool. The three met to work on a still-secret joint exhibit for the New York-based Rhizome.

I came to China expecting to witness Ai, Appelbaum, and Poitras produce an artistic meditation on government surveillance. I hadn’t counted on them surveilling each other. All three had cameras on them nearly the entire time they were together, with Ai and Appelbaum taking candid shots of each other constantly. Occasionally, it felt like Ai Weiwei’s compound had been transformed into “The Real World: Enemy of the State Edition.” Ai, who says he has taken 750,000 digital photos over the last decade, was the most prolific paparazzo of the bunch. (His iPhone 5s is so beloved to him that he once crafted a buttonless replica out of black jade.)

[…] When authorities increased the number of surveillance cameras in front of Ai’s studio, he marked each one with a red Chinese lantern. “I was thinking we could replace all of the lanterns with helium balloons that would block the cameras,” said Appelbaum to Ai soon after meeting him.

“There is no need to provoke,” responds Ai. “The lanterns are enough.” [Source]

Ai’s contribution to Hans Ulrich Obrist’s 2013 book “Do It: The Compendium,” on the other hand, was a set of instructions for a long-reach DIY spraycan holder for sabotaging surveillance cameras. The previous year, he marked the anniversary of his infamous 81-day detention in 2011 by setting up cameras to broadcast “self-surveillance” footage from his home over the Internet. The authorities ordered the feeds shut down after 46 hours. Read more on Ai’s life under constant and heavy surveillance via CDT.

[…] On the night he arrived, Appelbaum was happy to discover that, despite reports to the contrary, Tor was not blocked by China’s infamous Internet censors.

“The perceptions of China don’t meet the reality,” he said. “It doesn’t feel like an oppressive surveillance state. China has been demonized by the West.” [Source]

Hill notes, though, that Ai endures the distress of separation from his six-year-old son Ai Lao, who now lives in Berlin with his mother, “because they didn’t want him living in a repressive regime.”

Tor is not successfully blocked in China, but a post on the project’s blog in March last year described the ongoing “arms race” between Chinese censorship and Tor’s circumvention, which uses hidden “bridges” to evade blocking attempts:

The short explanation is that the old vanilla SSL Tor transport doesn’t work in China anymore due to their active probing infrastructure. The obfs2 transport doesn’t work anymore either, for the same reason. The obfs3 transport works great for now, and thousands of people are happily using it — and some of those people aren’t reflected in the graphs you see (I’ll explain that more below).

The medium-length explanation is that we’ve been leading and coordinating the international research effort at understanding how to design and analyze transports that resist both DPI and active probing, and approximately none of these approaches have been deployed at a large scale yet. So it doesn’t make sense to say that Tor is blocked in China, because it mischaracterizes Tor as a static protocol. “Tor” when it comes to censorship circumvention is a toolbox of options — some of them work in China, some don’t. The ones that work (i.e. that should resist both DPI and active probing) haven’t been rolled out very widely, in large part because we have funders who care about the research side but we have nobody who funds the operations, deployment, or scale-up side. [Source]

See also a technical analysis of China’s efforts to block Tor from 2012, and an update from Tor last October.

After filming the collaboration between Ai and Appelbaum, Poitras traveled to Hong Kong for a premier of her Oscar-winning Snowden documentary “Citizenfour.” The city features prominently in the film as the site of Poitras’ first meeting with Snowden in 2013. From Isabelle Steger at China Real Time:

How does it feel to be back in Hong Kong and why was it so important for you to screen Citizenfour here?

It’s kind of surreal. It feels nice to come back and show the film, and the last trip here was pretty tense, so it’s nice not to be under that same pressure. I had a nice lunch, got to see a bit of the city, there wasn’t really any time for that last time.

I haven’t traveled to any other countries recently to do press, but I wanted to do it here, just because I felt it was so important. Hong Kong is part of the film in a really big way and I wanted to return to see people, particularly Robert Tibbo, [Snowden’s] lawyer, who I haven’t seen in two years. It just was important for me emotionally. […]

[…] Do you have sympathy for the view that Mr. Snowden’s revelations handed authoritarian governments like China a propaganda win?

Honestly, people are always going to use things for political gain. But the truth is, what Ed decided to do was to expose massive wrongdoing by the U.S. government. So I think from that perspective, he did something that he felt was to benefit not just U.S. citizens but citizens all over the world. [Source]

Read more on the Edward Snowden saga and its consequences via CDT.