The Geopolitics of Earthquake Relief in Nepal 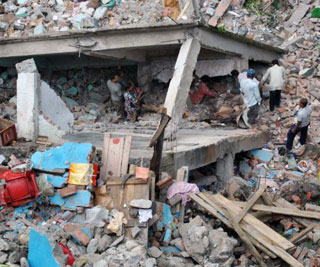 The 7.8 magnitude earthquake that hit Nepal on Saturday has so far killed more than 4000 people, including at least 20 in Tibet. China has rushed to send rescue crews and aid to its neighbor, as Ankit Panda of the Diplomat reports:

On Sunday, China sent a 62-member International Search and Rescue team to Nepal to assist in the humanitarian relief effort following the earthquake. According to Xinhua, the team includes “6 sniffer dogs and relevant rescue and medical equipment.” 40 members of the rescue team are from the 38th Group Army of the People’s Liberation Army.

Hong Lei, spokesperson for the Chinese foreign ministry, noted late on Saturday that China was preparing emergency relief materials for Nepal, in addition to the search-and-rescue teams. China is additionally sending “20 million yuan in tents, blankets, generators and other materials to be sent by charter flights.” [Source]

For several years, China has held an increasingly influential position with Nepal as it has upped investment in the country. China has also sought—and gained—Nepal’s support in staunching the flow of Tibetan refugees traveling across the border and in controlling the political activities of Tibetans already in Nepal. The aid China sends to the earthquake zone will further enhance China’s image among the Nepalese population as well as the government, Didi Tang reports for AP:

Nepal’s population of 27 million traditionally has fallen under India’s economic and political sway. India, also a predominantly Hindu nation, considers Nepal within its traditional sphere of influence, and as many as 3 million Nepalese live and work in India.

But recent years have seen Nepal forge closer ties with China as a counterweight, and the Nepalese government has assured Beijing that it will not tolerate any anti-China political activism by Tibetans in Nepal.

An increasingly expansive Beijing, meanwhile, is eager to court the Nepalese government as it opens trade routes south and westward and seeks to keep the neighboring country’s exiled Tibetan community from fomenting unrest across the border in China-controlled Tibet.

[…] “When China walks the walk and fulfills its duties, it will certainly boost its influence in South Asia and add to the good will that the Nepalese public has toward China,” [Peking University’s] Wang [Lian] said.[Source]

Bloomberg has more on how strong ties with Nepal will also help balance China’s contentious relationship with India:

China’s embrace of Nepal dates back to March of 2008, when there was a spate of anti-China protests by Tibetans on the eve of the Beijing Olympics, according to Pramod Jaiswal, a political and security risk analyst in New Delhi who got his doctorate at Jawaharlal Nehru University. [Source]

Read more about Nepal’s actions to help China quell protests in 2008, via CDT.

While accepting aid from China and other neighbors, the Nepalese government rejected an offer of help from Taiwan, with which it does not have formal diplomatic relations. AFP reports:

The Taipei-based crew was put on standby Sunday with much of the Nepalese capital in ruins and more than 3,500 confirmed dead, but were told aid was being prioritised from neighbouring countries.

“The Nepalese told us that it would first accept such aid from neighbouring countries like India and Pakistan, considering the chaotic conditions in Nepal, and to take advantage of the golden window for rescue operations,” minister David Lin said at a press conference in Taipei.

[…] Lin denied local media speculation that politics were a factor in the Nepalese government’s decision, but he was unable to explain why Nepal had accepted a team from Japan, even though Tokyo is around 1,500 kilometres (930 miles) further away from Kathmandu than Taipei. [Source]

From Emily Rauhala at Time:

It’s still uncertain whether Taiwan’s exclusion is an oversight or a (very poorly timed) slight. But it is clear that a mere two days after the quake, as Nepalis dig barehanded for their loved ones, and families sleep outside in the pouring rain, geopolitical questions loom large. Chief among them is how China’s involvement in the recovery effort could further change the balance of power in the region, challenging India and potentially putting Nepal’s Tibetan exile community at risk. [Source]

At Thinking Taiwan, J. Michael Cole states with more certainty his perception of why Nepal rejected Taiwan’s offer of aid:

For Nepalese officials, the risk of “angering” Beijing by allowing Taiwan’s participation in early rescue efforts apparently outweighs the benefit of the goodwill and experience that Taiwanese have offered. If Nepalese victims don’t receive timely assistance, there is a chance that some of them will have died in vain because of politics and the cowardice of Nepalese officials. Will Kathmandu be held accountable for such callousness? Probably not. After all, this is a regime that has increasingly depended on Beijing’s financial assistance and that has willingly participated in the repression of its own 20,000 Tibetans as the price to pay for closer economic ties with China. Tibetan groups claim that Nepali authorities banned all public activities to mark the anniversary of “Uprising Day” on March 10 this year. [Source]

Meanwhile, advocates for Tibetans worry that many refugees are living in remote villages in Nepal and are undocumented, so their fate in the earthquake is unknown. Rani Singh reports for BBC:

Most ethnic Tibetans live quietly outside Kathmandu in remote villages scattered across the mountains, right up to the Chinese border.

These villages lie right in the quake-affected zone – but those that have perished cannot be identified formally because officially they do not exist.

“We have no idea how many people have survived. There are no rescue missions operating in such isolated areas.” [Source]

Back in Kathmandu, Chinese tourists were met with momentary confusion about how they would be evacuated. From Rachel Lu at Foreign Policy:

According to China’s state-run Xinhua News Agency, there were about 4,000 Chinese tourists in Nepal at the time of the earthquake. Almost all of them, in the chaotic aftermath, were anxious to get home. “Passengers can board [Chinese planes in Kathmandu] with or without a plane ticket as long as they have Chinese passports,” according to an April 26 Xinhua editorial, which concluded, “In a time of need, the Chinese passport demonstrates its true worth.”

But in their haste to extract maximum propaganda value, it appears Xinhua editors neglected to check all the facts. A Chinese passport did not, in fact, automatically entitle the holder to a free ticket out of Nepal. Several travelers reported on social media that they were stranded in Kathmandu with little access to Chinese embassy workers and had to pay exorbitant prices for plane tickets out of Nepal. Soon, the Chinese foreign ministry also publicly disputed Xinhua’s story, and Xinhua later deleted it. [Source]

An aerial view shows structures in Kathmandu before (April 25) and after (April 27) #earthquake that struck #Nepal pic.twitter.com/JURYnjY48X