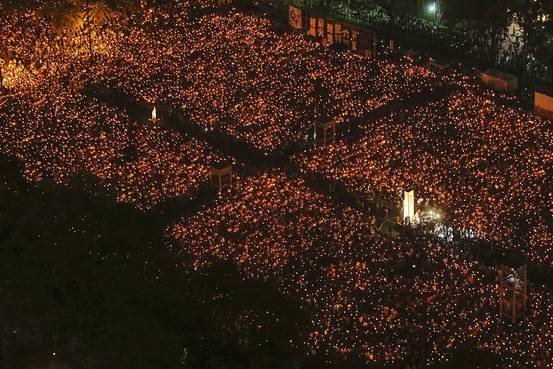 First, 11 Chinese students studying abroad in Australia, the US, and the UK wrote an open letter to the people of China, enumerating the horrors of the 1989 Tiananmen Square Massacre—which has its 26th anniversary next month—and calling upon the Communist Party to put those responsible on trial.

Then, an official Chinese-government tabloid, the Global Times, published an editorial demonizing that letter. With typical propagandist hyperbole, the editorial—headlined “Hostile forces target younger generation”—said that the students had been “brainwashed in foreign countries” and were trying to “tear society apart.” It also claimed, unconvincingly, that “Chinese society has reached a consensus on not debating the 1989 incident.”

The result? More people learned about the letter, and now censors are trying to purge the editorial from the internet. That is to say, the Chinese government is censoring itself.

[…] As with most government-backed statements, the Global Times’ hysterical response was widely reposted across the internet by state-run media. That, no doubt, gave the letter more attention than it would have gotten on its own. To make matters worse for the government censors, the letter was posted as a Google Form, which allowed readers to add their names to the list of signatories, vastly increasing the letter’s reach. [Source]

Sonnad cites a CDT-translated censorship directive on the Chinese-language editorial, and notes that the English-language version is still available from the Global Times. For a full translation of the students’ letter, see China Change.

Esther Fung at China Real Time spoke with Gu Yi, a student at the University of Georgia who contributed to the composition of the letter, about his motivation:

Why did you initially decide to write this letter?

I was motivated by my conscience of being a citizen in China and the aspiration to reveal the truth. For me, it’s a kind of moral responsibility. A number of students who were just peacefully marching and protesting in Beijing were killed by brutal physical force in 1989, and history has always been covered up. No proof has survived. Some of them were imprisoned. Relatives have been generally forbidden to mourn their loss publicly. So I believe that we students overseas — with full access to all this blocked information, documents and reports — have the responsibility to reveal the history to people at home.

There is proof backing up the facts mentioned in our open letter and other documents, including then-news reports, victims’ blood-stained clothes, photos of dead bodies piled up for identification and testimonies of survivors and foreign observers. This abundance of evidence is what this open letter has been based on. The problem is that the authorities’ attempts to remove or block every possible trail of the crackdown have made it difficult for many mainlanders to know the truth. [Source]