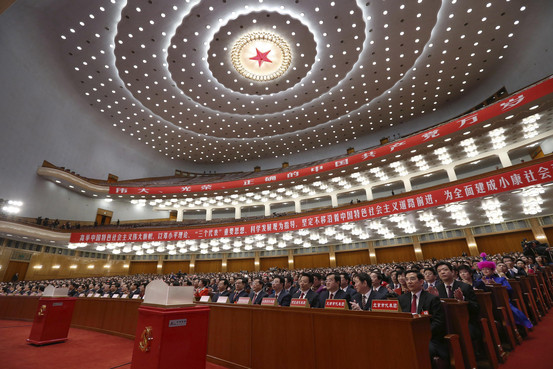 The text below is a proposal by 30 Chinese lawyers to the National People’s Congress for the abandonment of the proposed Foreign NGO Management Law. Read more on criticisms of the law during the public consultation period, which closes on June 4th, via CDT. Translated by Chang, and edited for clarity by CDT:

On May 5, 2015, the legal working committee of the NPC Standing Committee released the Foreign NGO Management Law (Second Reading Draft) (referred to below as “Draft”). This Draft is dedicated to “overseas” civil non-profit organizations, and requires a variety of administrative permissions on overseas civil non-profit organizations from establishment of representative organizations in China to exchanges, cooperation, activities, donations, and personnel recruitment. We discovered that this Draft, roughly written and hardly operable, lacks research on feasibility, necessity, and urgency. This draft mistakenly follows experiences of countries with multi-party systems like Russia. Therefore, we suggest that the NPC Standing Committee halt the adoption of the Foreign NGO Management Law, further deepen reform and opening, and promote instead of impeding civil exchange in and outside China. Our reasons are as follows:

1. This legislation project, launched in a hasty manner and lacking sufficient argumentation, is an arbitrary legislation.

On October 30, 2013, NPC Standing Committee published the legislation plan for the 12th NPC Standing Committee, including in total 68 legislative items of three major categories. Foreign NGO Management Law was not among the said items, which shows that legislative authorities did not deem it was pressing to adopt this legislation. However, at the 12th meeting of NPC Standing Committee held at the end of December 2014, this law was abruptly proposed by the State Council for deliberation. Legislation is a scientific and serious process. This law will have wide-ranging influence upon exchanges and economic and social development in and outside China, and should go through sufficient legislative planning and argumentation. Without long-term social discussion and theoretical foundation, it will be very difficult to enact a rigorous, regulatory, systematic, scientific, and effective law. The consequences will be too ghastly to contemplate if such law is adopted in such an arbitrary way.

2. Several provisions of this Draft violated the principle of necessity as provided in the Administrative Permission Law and relevant administrative laws.

International exchange and cooperation among civil non-profit organizations may be fully accomplished by self-discipline management and post-supervision by trade organizations. In fact, for more than 30 years of reform and opening-up in China, the post-supervision mode has always been proved effective. International exchange and cooperation among non-profit organizations are carried out in an orderly manner. “No additional permission unless necessary” is also a basic principle of authorization to administrative power. This law sets prohibitive provisions and approval as principles on international exchange and cooperation among civil non-profit organizations, with the exception of the freedom of private civil rights, and is against the necessity principle as provided in the Administrative permission Law and relevant administrative laws.

3. With unrefined and inexact text, poor operability, and an excessively large scope, this Draft is in violation of the fundamental national policy of “reform and opening-up” as well as the State Council’s reform spirit of “streamlining administration and power delegation.”

Article 6 of this Draft provides that “non-governmental organizations should conduct activities in China through their lawfully registered representative organizations. Unregistered representative organizations should first obtain temporary approval if they need to conduct activities.” The word “activity” sets a prior approval restriction on international exchange and cooperation of all civil non-profit organizations. However, as expressions such as “activity,” “project,” “approval,” and “consent” lack exact definitions, this Draft has too much flexibility and ambiguity. The law enforcement authorities will be granted too much discretion in its implementation, and the abuse of power by these authorities will occur on a frequent basis.

Premier Li Keqiang stressed on numerous occasions that streamlining administration and power delegation is, by way of simplifying matters subject to government approval, to release control as much as possible to market regulation and society at large. The government should leave alone all matters it could not intervene and manage all matters within its scope of responsibility. The expression “forbidden” appears 24 times in the full text of this Draft. Too many prohibitive provisions set administrative permission on all activities related to overseas non-profit organizations. It violates the fundamental national policy of reform and opening-up and the State Council’s spirit of “streamlining administration and power delegation,” and cannot demonstrate the self-confidence of a great and emergent nation.

4. This Draft has little contribution but much negative impact to its purpose of public security protection.

It was reported that, among overseas civil non-profit organizations that conduct activities in China, half of them are business organizations such as Chambers of Commerce and industrial associations, and the other half are charity and public interest organizations. As is known to all, there are a small number of overseas civil organizations for rights protection that are active in China. They have very small scale, very limited space and liberty and very few activities, and are constantly investigated, searched, and administratively punished by authorities such as tax, industry and commerce, public security, and entry and exit administrations. They have already made endeavors to be flexible in order to exist. Therefore, it is obviously mis-stated exaggeration to compare the rights protection organizations active in and outside China to “Color Revolutions” and “Jasmine Revolutions.”

If adopted, this Draft will indeed result in impact on rights organizations with which the government is truly concerned, but the impact will be very limited for the reasons above. But it will form an unexpected impediment to a large number of overseas civil organizations in the fields of culture (art), education, medical care, poverty alleviation, science and economy (Chambers of Commerce, trade associations, etc). A lot of overseas civil organizations have compliance departments, and lawyers in these departments will recommend them canceling projects in China. This law obviously will cause unnecessary international dispute, and affect amicable relationships between nations. It is “penny wise and pound foolish.”

5. China is different from countries with multi-party systems that provide freedom of association such as Russia, Egypt and India, and should not be misled by the experience of such countries.

In conclusion, we consider that if the Foreign NGO Management Law (Second Reading Draft) is adopted in a hasty manner, it will be against the fundamental principle of administrative legislation, harm China’s open and self-confident image as a great nation, and create unnecessary international dispute. We hereby suggest halting this legislative process.