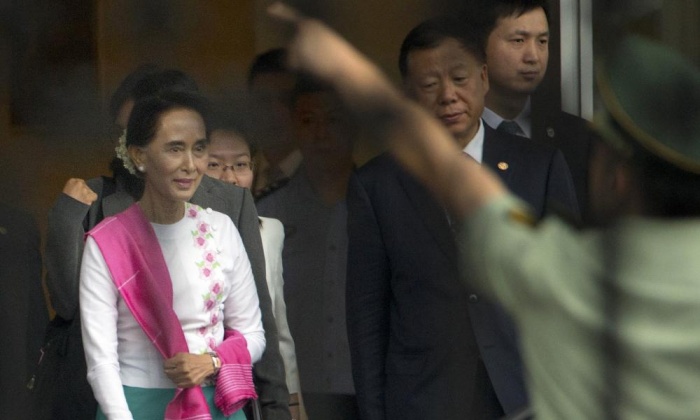 On Wednesday, Myanmar’s opposition leader and Nobel Peace Prize winner Aung San Suu Kyi arrived in Beijing for a debut visit to the country, during which she is expected to meet with President Xi Jinping and Premier Li Keqiang. A censorship directive earlier this week ordered Chinese media not to cover the visit. From BBC:

Aung San Suu Kyi, Myanmar’s opposition leader, has arrived in China on her first visit at a time of tension between the two countries.

Ms Suu Kyi will meet President Xi Jinping and Premier Li Keqiang, but no other details have been provided.

Relations between the countries have cooled in recent years, partly because of violence near their mutual border.

He added that China hoped Myanmar “would answer to relevant requests put in by China, stop the warfare, ease the tension, and restore peace, stability and normal order to the China-Myanmar border area at an early date.” [Source]

With Suu Kyi’s National League for Democracy expected to do well in Myanmar’s upcoming November election, the visit represents for Beijing an opportunity to boost its influence in Southeast Asia and demonstrate its growing frustration with Thein Sein’s quasi-military government as it oversees fighting with rebels along China’s border. Ian Williams at NBC News reports:

Until recently, a visit by Suu Kyi, an opposition leader who was kept under house arrest for 15 years by Myanmar’s military junta, would have been unthinkable.

That she’s been invited is an expression of China’s increasingly testy relations with Myanmar’s government and the wider struggle for regional influence between Beijing and Washington.

[…] While China usually isn’t shy about historic grievances and the protection of Chinese abroad, it has been cautious about the border fighting, denying that rebels are sheltered in Yunnan. The reason for that is Myanmar’s huge strategic importance as a source of minerals, timber and other natural resource, and as a strategic gateway to the Indian Ocean. Chinese oil and gas pipelines cross the country.

[…] “I think by inviting Suu Kyi, China is sending a message to Myanmar’s government,” said Du Jifeng, of the Chinese Academy of Social Sciences, that it wants friendlier relations and a solution to the border problem.

[…] It is also hugely symbolic and an expression of Beijing’s growing impatience with Thein Sein. [Source]

Due to Suu Kyi’s role as an icon of democracy, her visit also presents a political risk to Chinese leaders, who have implemented a sweeping crackdown on dissent and kept Nobel Peace Prize laureate Liu Xiaobo in jail. The Guardian’s Tom Phillips reports that activists in China are calling on Suu Kyi to make some reference to Liu’s detention during her visit:

Hu Jia, an outspoken Chinese activist, urged the Burmese politician, who received the Nobel peace prize in 1991, to speak against the imprisonment of Liu Xiaobo, the writer who was awarded the same prize in 2010, after being jailed for calling for democratic reform.

“It is her moral duty. I would certainly do so if I were her,” Hu told the Guardian. “She will not be arrested or silenced. On the contrary, the action would win her praise and support.”

[…] Farrelly said it was unrealistic to expect a “pragmatic and astute” Aung San Suu Kyi to criticise her hosts. “She’s a politician. The sooner we all start appreciating [her] as a political figure, I think the better it will be for everybody, including for her and for her team,” he said.

“She will probably take flak wherever she goes, whatever she says, whatever she does. Her appreciation, as far as I can tell, is that to win the election in 2015 and to set her National League for Democracy up for period in government is going to require them to do some things differently.” [Source]

But Liu Xia declines an interview request, explains "I am under close watch by the government. Comments I make can delay visits to Xiaobo."

Within her own country, Aung San Suu Kyi has remained silent on the persecution of Myanmar’s Rohingya minority, many of whom have now fled the country by boat. From South China Morning Post:

When thousands of Rohingya people from Myanmar were discovered floating in boats on the Southeast Asian seas much of the world was understandably gripped by this unfolding human tragedy.

[…] But what has surprised some is the silence of the Nobel peace prize laureate Aung San Suu Kyi.

“They have long imagined that any perception the NLD is too cosy with the country’s Muslims could lose them millions of votes. That, at least, is the fear.

“They are anxious that the Rohingya could serve as a wedge between Aung San Suu Kyi and tens of millions of Buddhists that she is counting on for votes. It doesn’t help that many NLD members probably support harsh treatment for the Rohingya and feel no special compassion for them.” [Source]