China and U.S. Accuse Each Other in Rights Reports 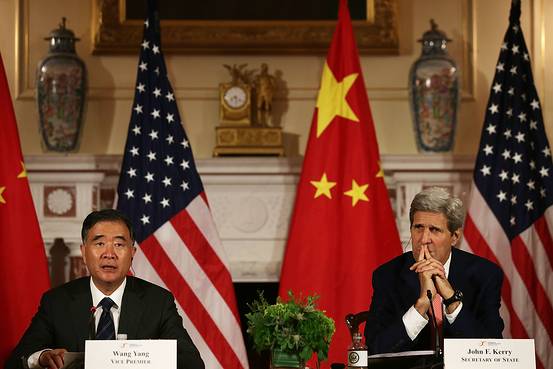 In a report released on Friday by the State Council Information Office, the Chinese government attacked America’s human rights record, citing racial discrimination and police violence, among other issues, as indications of human rights violations in the United States. Sui-Lee Wee and Ben Blanchard at Reuters reports:

In a lengthy report carried by the official Xinhua news agency, the information office of the State Council, or cabinet, said the United States “violated human rights in other countries in a more brazen manner, and was given more ‘red cards’ in the international human rights field”.

[…] The Chinese report, which was mostly compiled from U.S. media articles, said “racial discrimination has been a chronic problem in the United States human rights record”, adding that the United States suppressed the voting rights of minorities.

“In 2014, multiple cases of arbitrary police killing of African-Americans have sparked huge waves of protests, casting doubts on the racial ‘equality’ in the United States and giving rise to racial hatred factors,” the report said.

The report also criticized the United States for conducting surveillance on world leaders and civilians and for allowing a few interest groups to influence the government’s decision-making. [Source]

The New York Times has more details on the racial component of the accusations:

The report issued by the State Council Information Office cited the killing of black teenager Michael Brown in Ferguson, Missouri, and other cases in which African-Americans were shot and killed by white police officers.

Such cases “exposed the feature, gravity and complexity of human rights problems in the U.S.,” the report said. America’s institutionalized racial discrimination continues to negatively impact law enforcement and the judicial system, it said.

“Police killings of African-Americans during law enforcement have practically become ‘normal’ in the U.S.,” the report said. [Source]

At China Real Time, Chun Han Wong reports that the Chinese document is a rejoinder to the United States’ own annual human rights report released a day earlier in which China is criticized for clamping down on dissidents and ethnic minorities. The rebuttal also comes at the end of a three-day meeting between senior Chinese and U.S. officials at the annual U.S.-China Strategic and Economic Dialogue in Washington:

China has issued annual scorecards on human rights in the U.S. since the late 1990s, typically within days of the State Department’s yearly rights reports. According to Washington’s latest appraisal, “repression and coercion were routine” against civil and political rights advocates in China while “discrimination against minorities remained widespread,” as authorities continue to place tight curbs on freedom of speech, assembly and religious practice, among other civil liberties.

The two reports bookended the annual U.S.-China Strategic and Economic Dialogue in Washington, where top officials parleyed for 2 ½ days on cybersecurity, maritime tensions and bilateral economic ties. Clashes on these issues have strained U.S.-China ties over the past year, though officials from both governments said they hope the latest talks could soothe discord ahead of Chinese President Xi Jinping’s state visit to the U.S. in September.

China’s human rights record is a longstanding bugbear in bilateral relations, though officials and rights advocates in the U.S. have expressed growing concern over Beijing’s diminishing tolerance for activism and dissent since Mr. Xi took power more than two years ago. [Source]

Nicole Gaouette at Bloomberg Business has more on the portions of the U.S. report pertaining to China’s human rights record:

The report portrays modern-day China as a ruthlessly repressive political system that regularly deploys extralegal measures to keep dissent in check, particularly among groups such as Uigurs, a Muslim minority group, and Tibetans.

The report noted the disappearance of influential Tibetan monk Tenzin Lhundrup, who advocated for the preservation of Tibetan identity.

Throughout China, officials use “enforced disappearance and strict house arrest, including house arrest of family members, to prevent public expression of independent opinions,” the report said. Attempts to exert control extended to cyberspace, the report found, as China’s “authorities continued to censor and tightly control public discourse on the Internet.” [Source]

Full texts of China and the United States’ reports can be found here and here, respectively.