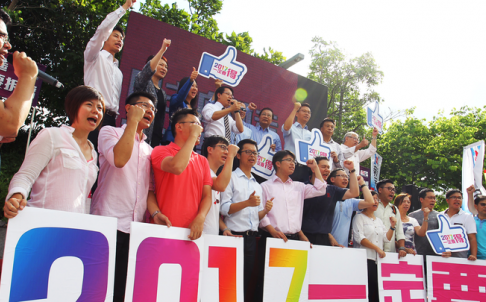 In a vote of 28-8, Hong Kong’s Legislative Council voted against electoral reforms that would have mandated all candidates for chief executive be approved by a pro-Beijing panel. The proposed reforms had inspired a seven-week protest movement on the streets of Hong Kong in the fall 2014. Prior to Thursday’s vote, the LegCo participated in a debate over the bill which was broadcast on local television. While the bill was widely expected to suffer defeat, due to the number of pro-democracy legislators who had promised to vote against it, several pro-Beijing representatives surprised many by walking out of the chambers before casting a vote. Ng Kang-chung and Tony Cheung of the South China Morning Post report:

About 30 pro-establishment lawmakers walked out of the chamber less than a minute ahead of the vote.

They included the central and local governments’ staunchest supporters from the Democratic Alliance for the Betterment and Progress of Hong Kong, Federation of Trade Unions and the Business and Professionals Alliance. They were yet to explain why they walked out of the chamber and refused to vote on the reform package.

The only eight pro-establishment lawmakers who voted for the reform package were the five lawmakers from the Liberal Party, Federation of Trade Unions lawmaker Chan Yuen-han, and independents Lam Tai-fai and Chan Kin-por.

No one from the DAB, Business and Professionals Alliance and the New People’s Party were present for the vote.

Some of those who left said they did so to force a delay as they waited for influential pro-Beijing lawmaker Lau Wong-fat, who had not yet arrived. Responses on Twitter were swift.

"Reform" vote vetoed 8-28, with most pro-Peking members walking out at the last second.

Not a single soul who has pledged to vote down the proposal went back on their promise.

pro-beijing lawmakers all have a long face after they fail to vote on the #HKreformvote by mistakes pic.twitter.com/LlRGFpdBXs

It's looking like an epic own goal by pro-gov side. I can't believe it. Amazing #HKreformvote

Only 8 people vote for BJ's plan. Others in favor could not connect brain to finger and walk out at wrong time. BJ will love this.

Hard to believe pro#CCPers were waiting for Lau Wong-fat- after all, his vote would not have been decisive. Something doesn't add up

Lots of police outside government HQ after the vote with not much to do. pic.twitter.com/HdXNESZLq2

With only 8 out of 70 votes, the HK gvt's proposal for electoral reform looks like a complete failure + Pan-Dems safer at next elections.

The South China Morning Post has summarized some of the statements made during the pre-vote debate. Protesters from both sides gathered at the LegCo building during the debate, with pro-Beijing demonstrators outnumbering those supporting democratic reforms.

While protests leading up to the vote have remained peaceful, a foiled bomb plot has aroused suspicion of subterfuge on both sides. Ten people were detained after bomb-making equipment was found in their possession. According to police reports, some of the suspects were part of a “localist” radical group. From Reuters:

Some of those arrested in the raids belonged to a little-known group called the National Independent Party, media reported on Tuesday. According to its Facebook page the group was set up in January, but the page has now been deleted.

A June 1 post purportedly from the group warned that, if the reform package was passed, “Hong Kong people should be mentally prepared there will be casualties”.

The Global Times, a widely-read tabloid published by the Chinese Communist Party’s official People’s Daily, said in an editorial that following the finding of the explosives, Hong Kong risked descending into chaos. [Source]

But some in the pro-democracy camp are skeptical of the police claims, as Joanna Plucinska reports for TIME:

However, the fact that the organization was hitherto unknown has aroused suspicions. “It doesn’t seem like a lot of these [separatist] organizations are very familiar with them, and some even feel that this organization seems to have a very suspicious background,” Professor Eliza Lee, head of the Politics and Public Administration Department at Hong Kong University, told TIME.

Some Hong Kongers on social media pointed out linguistic inconsistencies between the language of propaganda material police claim to have seized from the “National Independent Party” and words that would have actually been used by bona fide separatist groups, while others pointedly asked why a separatist group would have the word National in its name.

Other separatist figures stressed their commitment to nonviolence. Ray Wong, leader of separatist group Hong Kong Indigenous, told the Post that the arrests were a smear campaign, while Danny Chan, head of the separatist Hong Kong Blue Righteous Revolt, said he did not support violence. [Source]

Before the vote, Lily Kuo wrote in Quartz that whether the reforms passed or not, the cause of democracy in Hong Kong would suffer a loss:

If the plan is voted down, in many ways Hong Kong goes back to where it was over a year ago, when the electoral reform process first began. The next election in 2017 will follow the same process that pro-democracy demonstrators had hoped to change: an election committee made up of business leaders and legislators will choose the chief executive, as has been the case since the city was handed back to Chinese control in 1997.

Chinese officials have already said that the process for electoral reform cannot be restarted and that the current framework involving a nominating committee could not be changed. Some have proposed looking ahead to 2022, many including Willy Lam, a professor of Chinese politics at the Chinese University of Hong Kong, believe Beijing will just offer more or less same formula then. [Source]

For more on the vote, see a multimedia special report from South China Morning Post.