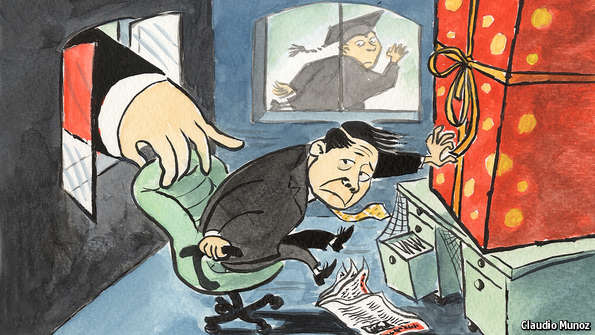 As a result of President Xi Jinping’s ongoing anti-corruption campaign, there has been a steady decline in the number of college graduates seeking employment in China’s public sector along with a parallel exodus of civil servants looking for more lucrative jobs in finance and industry. From The Economist:

GOVERNMENT jobs have long been prized in China. Most years new records are set for the number of people sitting civil-service exams. University students, for all their disenchantment with politics, have been flocking to join the Communist Party in the hope of getting a leg-up into the bureaucracy. Such a career has offered security and perks aplenty. The only drawback has been pitifully low wages. This month officials are to get their first pay rises in nearly a decade; even so, many are heading for the door. Students are showing signs of losing interest in the career. Civil servants are anxious.

The reason is President Xi Jinping’s campaign against corruption, the most intense and sustained in the party’s history. It has made it harder to trouser the bribes that have traditionally supplemented those meagre official salaries. Many civil servants now fear a knock on the door by agents of the party’s anti-corruption department. In 2014 it punished 232,000 officials, 30% more than in the previous year. That was still only about 3% of officialdom, but the publicity surrounding these cases has compounded anxieties. Many officials are being taken, with their spouses, to learn a lesson by visiting their former colleagues in prison.

A Chinese job-search website, Zhaopin.com, reported that in the three weeks after the lunar new-year holiday in February more than 10,000 government workers quit their jobs to seek greener pastures, mainly in the finance, property and technology industries—an increase of nearly one-third over the same period in 2014. The company attributed this to a new emphasis on frugality in government work. Lavish meals are now banned (much to the chagrin of restaurants, which have suffered falls in profits). Governments are no longer allowed to build fancy offices for themselves. Stricter controls have been imposed on the size of ministers’ offices and temperature settings in government buildings. The receiving of gifts and donations of cash, once common features of bureaucratic life, has become far riskier. Earlier this year an investigation revealed the diversion by the Shaanxi provincial government of 89m yuan ($14.4m) in disaster relief funds toward the construction of new homes for civil servants. Officials do receive housing benefits, but not enough to cover the kind of well-appointed accommodation to which they aspire. [Source]

Low pay and vexing bureaucratic intervention have led many judges and other legal professionals to leave the party-controlled justice system to seek employment in the private and non-profit sectors. Mimi Lau at South China Morning Post reports:

Approaching 45, Dr Liao Yaozhong has only recently launched his career as a private sector lawyer. But his decision to make a new start, after quitting his job as deputy judicial bureau chief of Hengyang , Hunan province, in December 2013, was no hasty decision caused by a mid-life crisis.

[…] Liao is far from alone in deciding to leave behind the Communist Party-controlled justice system. In recent years the nation’s lower level judicial offices and courts have been experiencing particularly high turnovers due to resignations.

More than 500 people had either resigned or asked to be transferred from Beijing’s city court system in the past five years, citing low pay and high pressure, China Economic Weekly reported last week.

It noted that judges’ remuneration had increased as part of ongoing judicial reform; in Shenzhen judges’ pay had risen 10 per cent.

It also called for judges to be given more independence, free of bureaucratic intervention. [Source]