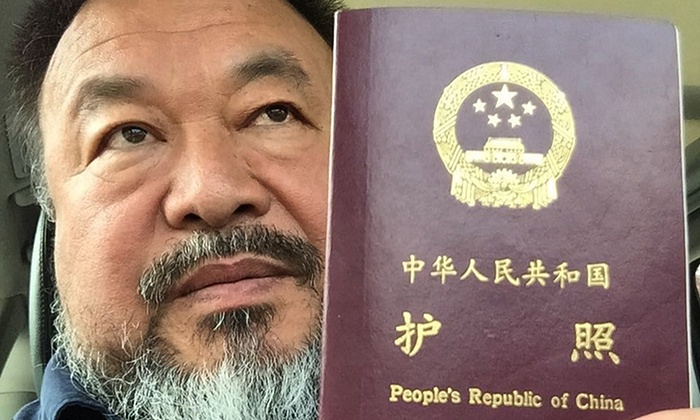 On Twitter and Instagram, Ai Weiwei today announced that authorities had finally returned his passport. The outspoken artist has been forbidden from overseas travel for over four years, since he was detained at the Beijing airport while attempting to fly to Hong Kong in April 2011, and subsequently detained for 81 days. The Guardian’s Tom Phillips reports on Ai’s initial reaction, and a mixture of celebration and realism from his supporters:

“When I got it back I felt my heart was at peace,” the artist told the Guardian on Wednesday afternoon, just hours after police handed him back the travel document and informed him he was free to go overseas.

“I feel pleased. This was something that needed to be done,” added Ai, who has long been a vocal critic of China’s leaders. “I was quite frustrated when my right to travel was taken away but now I feel much more positive about my condition.

[…] Ai said his first trip would be to Germany, where his six-year-old son has been living since last year.

[…] Fans, friends and relatives of the Chinese artist celebrated Ai’s freedom on Wednesday.

[…] Others reacted more cautiously. “Congratulations Mr Ai Weiwei on getting your passport back. But having a passport doesn’t mean you can get out of China freely,” Liu Xiaoyuan, a prominent human rights lawyer, wrote on Twitter. […] [Source]

The New York Times’ Austin Ramzy reports further on Ai’s 2011 detention, the activism that attracted official attention, and on the artist’s reaction to his travel restrictions:

Mr. Ai, who was a design consultant on the Bird’s Nest stadium in Beijing and exhibited his sculptural installation “Sunflower Seeds” at the Tate Modern in London, was detained in 2011 while trying to fly to Hong Kong from Beijing. He was held and interrogated for 81 days and later prosecuted on a charge of tax evasion. A court ruled against him and said his studio owed $2.4 million in penalties and back taxes.

He has said the case against him was retaliation for his political activism, including his memorializing the thousands of children who died in schools that collapsed during a 2008 earthquake in Sichuan Province.

[…] Mr. Ai also turned his years without a passport into an art project, filling the basket of his bicycle, which was locked outside his studio in the Caochangdi district of Beijing, with flowers each morning. He posted the photographs online, and then reposted images of flowers that supporters had directed to him. He noted that Wednesday was his 600th day of placing flowers since he began the project in 2013. [Source]

Last week in an article on a crowdfunding campaign by the Royal Academy of Arts to bring a project of Ai’s to London, The Guardian reported “signs of a softening attitude towards the artist by the authorities; he has not been prevented from having four solo shows in Beijing in the past year.” A post today at the Royal Academy’s website confirms that the now internationally-mobile Ai will be traveling to London to attend the exhibition:

Ai Weiwei has regained his passport from the Chinese government and will be travelling to London for his landmark exhibition in September, it was confirmed today.

[…] Today’s news comes just eight weeks before the opening of a major exhibition for the artist at the Royal Academy – one that the artist has been planning remotely from his Beijing studio with the show’s curators, Adrian Locke and Artistic Director of the Royal Academy, Tim Marlow.

Tim Marlow said: “Ai Weiwei has just received his passport from the Chinese authorities and is now free to travel outside of China. This is wonderful news for Ai Weiwei, his family and for artists worldwide. We are delighted to announce that he will be joining us as we finalise the installation of his exhibition at the Royal Academy of Arts, London. The exhibition opens on 19th September and will be the first major institutional presentation of his work in the UK.” [Source]

Ai Weiwei’s 2011 detention came amid a broad crackdown by the Hu Jintao administration on activists, lawyers, bloggers, and other critics of the government. His passport was returned as the Xi administration is engaged in a similar crackdown, the most recent campaign of which has seen over 230 lawyers and activists questioned, detained, or missing since July 10.