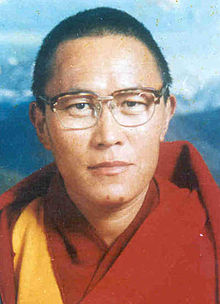 Sixty-five-year-old Tibetan Lama Tenzin Delek Rinpoche died in prison while serving a 20-year sentence for alleged involvement in bombings in Chengdu. Tenzin Delek has long proclaimed his innocence and his supporters have frequently called for his release since he was sentenced in 2002. In recent years, supporters have asked for his release on medical parole as he suffered from a heart condition and high blood pressure. Patrick Boehler at the New York Times reports:

Tenzin Delek was arrested in April 2002 in connection with a series of bombings in Chengdu, Sichuan’s capital. In December of that year, he was given a death sentence with a two-year reprieve, meaning that the threat of execution would be lifted after two years, contingent upon good behavior. A co-defendant was executed in 2003.

Tenzin Delek denied the charges against him, Human Rights Watch said in 2004, citing a tape recording secretly smuggled out of prison. His sentence was later commuted to life imprisonment and, in 2005, reduced to 20 years in prison.

The monk was a community leader among Tibetans in eastern Sichuan and had spoken out against deforestation, Tenzin Dolkar, executive director of Students for a Free Tibet, wrote in an email. “Tenzin Delek’s activism on this range of issues made him a target of the Chinese authorities, who for 10 years attempted to limit his work and influence,” she wrote.

Tens of thousands of supporters in his home county of Litang in eastern Sichuan signed a petition demanding the monk’s release, she wrote. [Source]

Louise Watt at AP has more on his background:

During that time, the Dalai Lama recognized Tenzin Delek as a tulku, or a reincarnated lama.

In 1987 he returned to China, where he worked to establish monasteries, health clinics, small schools and orphanages, rising in prominence.

Human rights groups have said his relationship with Chinese officials took a turn for the worse when he rolled back attempts to clear forests and because of his support for the Dalai Lama, who is considered a separatist by the government. [Source]

In 2009, several of his supporters were arrested during protests calling for his release. Many of the calls for his release over the years have been directed at former security chief Zhou Yongkang, before his own downfall and arrest, as he served as Sichuan Party Secretary at the time of Tenzin Delek’s arrest. On the anniversary of Tenzin Delek’s arrest in 2014, Tibetan writer Woeser wrote a piece called “Remembering Tenzin Delek Rinpoche Who Has Been Wrongfully Serving A Prison Sentence for 12 Years.”