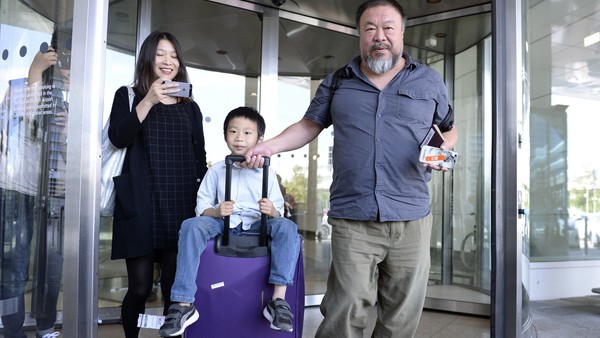 British home secretary Theresa May has reversed a decision to grant Chinese artist Ai Weiwei a restricted visa based on his alleged failure to disclose a past criminal conviction. The case sparked fierce criticism: Ai has never been criminally convicted or even charged, and threatened to cancel his trip altogether if the original decision stood. From Alan Travis at The Guardian:

A Home Office spokesman said: “The home secretary was not consulted over the decision to grant Mr Ai a one-month visa. She has reviewed the case and has now instructed Home Office officials to issue a full six-month visa. We have written to Mr Ai apologising for the inconvenience caused.”

The artist is due to visit London in September for his first major institutional exhibition in Britain at the Royal Academy of Arts, whose director has described the original decision as “unspeakably unfortunate”. The landmark solo exhibition has a private preview on 15 September and the truncated visa meant that he would have been able to attend the opening but might not have been able to supervise its installation.

The 20-day business visitor visa he was granted would have run out just before China’s president, Xi Jinping, is due to start a high-profile state visit in October. [Source]

This “curious, and convenient, coincidence” led to speculation that British authorities were trying to avoid any embarrassment during overlapping visits. Alternatively, immigration officials may genuinely have mistaken Ai’s 81-day detention in 2011 for a prison sentence, or a 2012 tax evasion fine levied against the Fake design company for a criminal verdict against the artist himself. The tax case appeared to be a thinly veiled attack on the artist, but he was not its official target, and the case was civil, not criminal. These distinctions were not always clearly conveyed by media coverage at the time, however. Read more about the case via CDT.