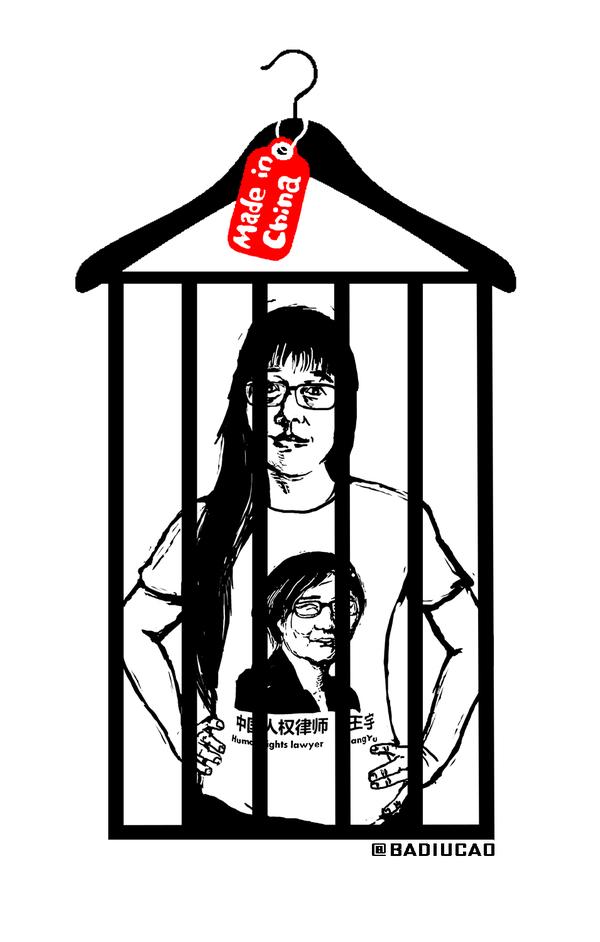 In his latest drawing, cartoonist Badiucao draws attention to a Guangdong woman believed to have been detained for her role in designing and mailing T-shirts showing support for detained human rights lawyer Wang Yu:

Clarification: While Liu Yajie may have been detained in connection with the T-shirt, the reason for the other three detentions is unclear

On August 26, Liu Yajie tweeted a picture of herself wearing a shirt with Wang Yu’s likeness on the front, and the English word “Free” on the back:

A picture of Huang Xi, another of the four believed to be detained, can also be seen wearing the shirt in Weiquanwang.org’s write up on the recent detentions.

Wang Yu was one of hundreds of human rights lawyers and activists detained in July in what has become known as the “Black Friday” crackdown. The picture shown on the T-shirt that may have resulted in Liu Yajie’s detention comes from a Badiucao drawing that called for the release of eight lawyers in July. While many of the detained have since been released, at least 22 remain in detention, many in undisclosed locations. A group of their family members—including Wang Yu’s mother—recently penned an open letter to Minister of Public Security Guo Shengkun calling for their release. From China Change’s translation of the letter:

[…] Since July 9th, our loved ones have been disappeared, and they include 17 lawyers, their assistants, and law firm staffers, as well as 6 rights defenders. Their disappearances all followed the same pattern: the people who took them away, either in Beijing or Tianjin, claimed that they were “Tianjin police.” They were taken away for allegedly “provoking disturbances” or merely for “committing a crime” without any specifics; and following their forced disappearance we have had a hard time to get them lawyers. Lawyers who expressed desire to represent them were visited by security police who threatened them against any involvement.

Those of us who have been able to hire lawyers for our loved ones have seen that when the lawyers attempted to meet their clients according to procedures, the Tianjin police denied that they had taken away our loved one.

When a terrorist attack is perpetrated, a terrorist group will come out and claim responsibility for it. When the police system of the People’s Republic of China disappears its citizens, shouldn’t it make a statement and say something? […]

[…] In short, 23 PRC citizens have been disappeared, some for as long as 50 days by now, and the public security apparatus you head have had no intention to honor our lawful rights to information.

Why? Since China has been flaunting “governing the country according to the law,” we wonder: Is the law the government acts on the same as the promulgated law? Words fail to express our anxiety and helplessness. […] [Source]

At The Guardian, Tom Phillips quotes detained lawyer Li Heping’s attorney characterizing the open letter as an act of desperation:

Cai Ying, a lawyer for Li Heping who has been unsuccessfully searching for his client since 16 July, said police were still refusing him information about the missing attorney’s whereabouts.

“The families were forced to publish that open letter – they have no other channel for getting their voice heard,” Cai said. “It really is an act of helplessness.” […] [Source]

CDT is now selling merchandise featuring Badiucao’s work in our Zazzle store. See also a Q&A with Badiucao in which he discusses his artistic and personal influences, and his earlier cartoons for CDT.