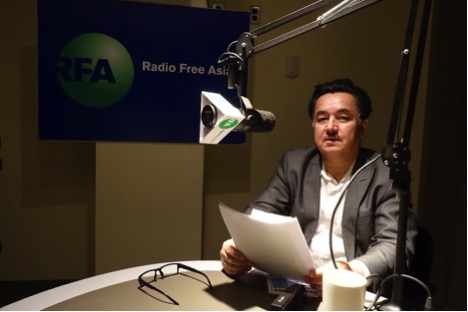 The brother of Shohret Hoshur, a journalist for Radio Free Asia’s Uyghur service, is scheduled to go on trial tomorrow in Urumqi. The Committee to Protect Journalists reports: Update: Trial of RFA reporter’s brother in China could start on Wednesday

After several false start dates, the trial of Rexim Hoshur, the brother of Shohret Hoshur, a Radio Free Asia (RFA) reporter based in Washington, is now scheduled to start on Wednesday in Urumqi, the capital of China’s predominantly Muslim Xinjiang Uyghur Autonomous Region. Another brother, Shawket, could come to trial next month, RFA says. Though neither of the brothers are journalists, they are charged with “leaking state secrets,” an accusation often used to silence journalists and bloggers within China. Another of Hoshur’s brothers, Tudaxun, was sentenced to five years in prison last year on similar state security charges.

RFA told CPJ by email today that family is barred from attending the trial, though their lawyer is trying to get a permit for a sister to attend.

It seems very clear that the Hoshur family is being punished because of Shohret’s work for RFA. CPJ and many others have been watching this case unfold over the last eight months or so, hoping for some sort of intervention on the part of the United States on behalf of an American journalist. In addition to the considerable international media coverage, in July Senators Mark Warner and Marco Rubio sent a letter to Secretary of State John Kerry, asking him “to make clear to the Chinese government that Mr. Hoshur’s case is a priority for the Department of State[.]” U.S. Journalists have also raised the case with Ambassador Max Baucus in Beijing.

Despite this pressure from so many sides, it seems possible that whenever the trial does go ahead, that Rexim, like his brother Tudaxun, will be found guilty of some sort of overly broad state security violation, given the increasingly harsh anti-media policies that swept in with President Xi Jinping. Over the more than six decades of Communist Party rule, media suppression in China has followed a cyclical pattern of loosening and tightening again, but the current downturn that came in with the Xi government seems by far the deepest.

Last month the New York Times profiled Shohret Hoshur and his work for RFA. Read more about the cases against his brothers via CDT and CPJ.