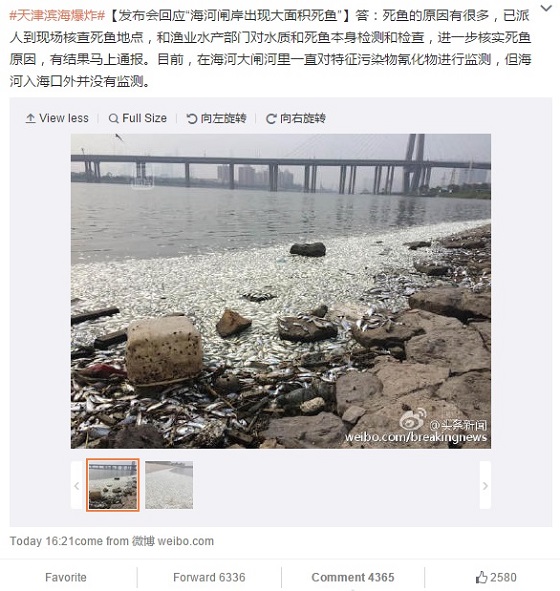 As officials deal with public worry over toxic fallout from the massive explosions at a chemical storage facility near the Tianjin port last week, photos of fish carcasses washed up on the shore of the Haihe River have been making rounds on social media:

VistaKanTianxia (@Vista看天下): Dead Fish at Lock on Tianjin’s Haihe River—On the afternoon of August 20, Sohu News discovered dead fish on a large area by a lock on the Haihe River in Tianjin’s Binhai New District. This area is about 6 kilometers away from the center of the Tianjin Port explosions. According to residents in the area, there has never before been an appearance of dead fish on this scale.

Environmental officials have reported toxic levels of cyanide in nearby waterways, but have also said that the city’s drinking water remains safe and stressed that mass fish die-off is a common summer phenomenon in the region. The New York Times’ Dan Levin and Javier C. Hernandez report:

Throngs of curious onlookers gathered on Thursday on the banks of the Haihe River to take pictures of the grim scene of dead fish, while officials tried to reassure the public. Mass die-offs are not unusual in the summer, when oxygen levels in the polluted river water can fall sharply, the officials said.

The state-owned China Central Television reported later that tests found no significant presence of cyanide in that part of the river.

[…] Photos of the dead fish were posted widely on Chinese social media, feeding public worries over the tons of chemicals that were in the warehouse. The authorities have already said the logistics company that operated the facility broke the law by storing such dangerous materials too close to apartment houses, highways and public buildings. [Source]

I got up close to the massive fish die-off in #Tianjin, and now plan to never do anything like that again. #China pic.twitter.com/N1iQWoFHNp

Official attempts to reassure the public have not been well received by many netizens, who sarcastically quipped about the true cause of the mass fish death:

WangHang’a- (@王航啊-): I know, the blast was completely unrelated, the government doesn’t need to say it.

MiaoChengdashu (@淼城大叔): They were killed by the moving concern of the authorities.

Huqian’ershi (@胡弃暗二世): The fish were killed by the lies of the country.

Jinshenbingyousuohaozhuan (@靳神病有所好转): Who started this rumor?! The Party Defense Squad says it’s nothing, so I ask them to take the lead and sample some of the fresh fish filets to set the record straight!

Hanwuwentang (@汉武文唐): These fish all came up to be the single ingredient in the diet of Tianjin officials.

ZhangWenzhi715 (@张文智715): Clinical depression, suicide by drowning. The evaluation is over. [Source]