What Happened to the Detained Lawyers? 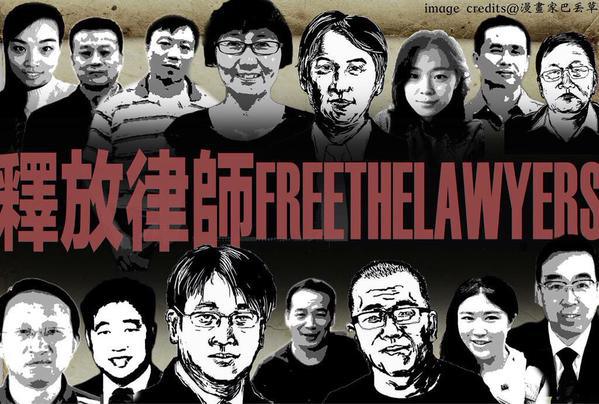 Chinese Human Rights Defenders (CHRD) provides an update on the status of several of the lawyers who were part of the so-called Black Friday round-up that netted more than 300 lawyers and activists in July. For the seven who remain in custody under criminal detention, the 37-day detention limit has already been exceeded. According to CHRD, 22 of the original detainees remain in police custody: seven have been criminally detained, eight are under residential surveillance at a location designated by police, and the other seven have been disappeared:

The current crackdown is particularly alarming as it has targeted lawyers and authorities conducted themselves with complete disregard to the legal rights provided in China’s own law. State media reports on the detained lawyers was, in many instances, the first time families learned of their loved ones’ status after they went missing, and have yet to receive police notice of detention. Authorities have flouted many legal provisions outright, or used legal loopholes related to national security to deny due process rights. As most individuals have not been able to receive a visit from their lawyer, it is unknown if they have been tortured or mistreated in detention, which is likely due to China’s systemic problem with torture. A list of some of the known violations includes:

Meanwhile, Pu Zhiqiang, one of China’s most prominent rights lawyers, has had his case delayed another three months, after over a year in detention without trial. Pu was detained a year before the Black Friday crackdown while commemorating the 25th anniversary of June 4th. Radio Free Asia reports:

Defense attorney Mo Shaoping told RFA that, by law, Pu’s case should have gone to trial within three months of being officially charged.

“However, with the approval of a higher court, it can be postponed for three more months if the court believes the case is a complicated one,” he said.

“This is what the Beijing Second Court did, and it was approved by the higher court.”

Mo said the extension was technically within the bounds of law, but said the basis for the move was questionable.

“I can’t say it’s against the law, but whether this is a complicated case or not is a different story and it depends whom you ask,” he said. [Source]

To help people better understand the kind of work for which many of the lawyers, including Pu, have been detained or otherwise harassed, Cao Yaxue and Wang Yaqiu at China Change describe 14 cases handled by China’s rights lawyers, including the Sun Zhigang case, which led to the abolition of the “Custody and Repatriation” detention; the Taishi Village case; and the melamine milk powder case, which sought compensation for victims of a milk poisoning scandal:

In China’s legal environment, the efforts of rights-defense lawyers often end in failure. In the eyes of the authorities, however, these Sisyphean efforts clearly represent a kind of defiance. Examining the cases that rights lawyers have taken on over the years helps us understand the origins and logic of the fierce repression they are experiencing under the Chinese Communist Party’s authoritarian rule. [Source]

Some fear that the National People’s Congress may be attempting to legislate against lawyers’ defiance in court by including new rules about courtroom behavior in revisions to the Criminal Law. From Duihua Human Rights Journal:

One of the more controversial parts of the current proposal to amend China’s Criminal Law concerns the possible expansion of Article 309, covering the offense of “disrupting courtroom order.” Lawmakers have argued that new measures are necessary to “ensure the ability of the people’s courts to implement their adjudicatory powers in an independent and impartial manner” by punishing those who might try to use courtroom disruptions to influence judicial decision-making. They are responding to worries about a worsening atmosphere inside China’s courtrooms—particularly the sense that growing antagonism between judges and defense lawyers is helping to undermine the dignity and credibility of the courts in the public eye. Critics, on the other hand, argue that the proposal unfairly targets lawyers and will have a chilling effect on their ability to pursue vigorous defense on behalf of clients.

[…] At the heart of the debate over the proposed amendment to Article 309 is disagreement over the root causes of tension in the courtroom. Who is to blame when conflict erupts between the various parties at trial, especially between lawyers and judges? Are unscrupulous lawyers showing brazen contempt for the law and the courts, or are judicial bias and procedural violations forcing some lawyers to adopt more confrontational tactics as a form of protest? Regulating lawyer behavior through the threat of criminal sanctions might lead to a more orderly courtroom, but if defense lawyers become meek participants in judicial proceedings that remain arbitrary and biased, then this is likely to do little to enhance the courts’ reputation for delivering justice. On the contrary, imposing further limits on the fragile rights of lawyers may actually erode public confidence in the Chinese judicial system even further. [Source]

The official media offered a backhanded show of support for China’s lawyers by affirming their need for a “better environment” while also expressing the need for tighter regulations over their behavior. From Xinhua:

Meanwhile, Meng [Jianzhu, head of the Commission for Political and Legal Affairs of the CCP Central Committee] stressed that lawyers’ practices directly influence the public image of the profession, people’s belief in rule of law and confidence in social justice, urging them “to obey laws and regulations, stick to facts and exercise cautions in words and deeds.”

“Judicial workers and lawyers are key components of our socialist legal team, undertaking the task of protecting people’s lawful interests, ensuring correct implementation of the law and promoting justice,” he said.

Meng urged political and legal affairs organs to help establish “a new relationship” between judicial staff and lawyers so that they can “respect, support, supervise, treat each other equally and maintain normal communications and positive interactions.” [Source]