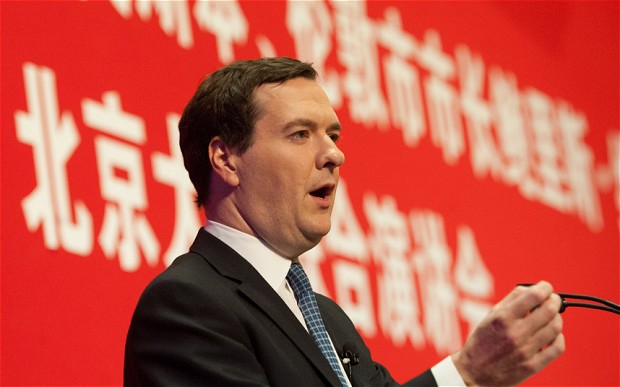 Chris Patten, who was the last British governor of Hong Kong and a former chair of the BBC Trust, said he was surprised by what Osborne was doing and saying on his five-day trip last month, where he announced a deal with China to finance and build nuclear power stations in the UK.

In an interview with the Guardian, Patten said he did not believe David Cameron had “departed very far from traditional Tory instincts” but “the jury’s out” on Osborne.

On the chancellor’s China trip, he said: “There was a danger that the Treasury would be allowed to get away with the argument that ‘soft power’ doesn’t include regard for human rights and civil liberties around the world. These ideas weren’t always regarded as so off the wall.” [Source]

Testimony before a parliamentary committee last week appeared to confirm this shift. From Oliver Wright at The Independent:

Human rights are no longer a “top priority” for the Government, Britain’s most senior Foreign Office official has admitted, as ministers put resources into supporting trade deals ahead of tackling injustice in other parts of the world. In a remarkably frank admission to MPs, Sir Simon McDonald, Permanent Secretary at the Foreign Office, said that human rights no longer had the “profile” within his department that they had “in the past”.

And he added that the Conservatives’ “prosperity agenda” was now “further up the list” of areas on which the department was concentrating its dwindling resources.

Last night human rights charities said Sir Simon’s comments were as “astonishing as they were alarming” and described the change in focus as “deeply regrettable”.

[…] A Foreign Office spokeswoman insisted that human rights were still “an integral part of the Foreign Office’s work” and were “intrinsically linked with many aspects of our national interest, including the stability and prosperity of our international partners”. [Source]

But The Independent’s Joan Smith noted the extent to which British policy seems disengaged from such concerns, with its approach to China warming just as the country’s rights climate has chilled.

According to Human Rights Watch, China’s government systematically curbs fundamental rights, including freedom of expression, association, assembly and religion. Since 2013, the country’s leadership has “unleashed an extraordinary assault on basic human rights and their defenders with a ferocity unseen in recent years”.

Bizarrely, this assault on fundamental rights has been accompanied by a mellowing in attitudes towards China. The Conservative Party is at the forefront, muting Britain’s critique of human-rights abuses until it reached last week’s historic low point. The Chancellor has played a key role in this process, which dates back to the autumn of 2013 when he led a trade mission to Beijing. “China is what it is,” Osborne said then. “We have to be here or nowhere.” He was accompanied by the Mayor of London, Boris Johnson, who is another enthusiast for trade links between the two countries. [Source]

At The Diplomat, former British diplomat Kerry Brown focused on Osborne’s particularly contentious visit to the troubled region of Xinjiang:

It is now clear that the British Treasury rather than the Foreign Office runs China policy. Under its new bureaucratic masters, the U.K.’s China policy has become steely, self interested, and, to some degree, very consistent. Britain joined the China-led Asia Infrastructure Investment Bank earlier this year, despite irritating their key ally the United States in doing so. Osborne’s sojourn to Xinjiang was also high risk. No other British minister has ever visited, and very few foreign emissaries have made the trip. Taking a trade delegation to such an area basically conveys one point: no matter how intense the concerns about human rights and security, trade has to go ahead when it comes to China.

Amoral foreign policy has been a unique specialty of the U.K. for centuries. But there is a more forensic point that needs to be made here. Attacking Osborne’s Xinjiang visit for moral reasons only gets lost in ideological and values battles. The greatest issue with this visit is that even on its own hard-nosed, pragmatic terms, it is hard to make sense of it.

[…] As it is, there is the sneaking suspicion that Osborne went to Xinjiang not for commercial reasons, but to pander for political favor in Beijing. And that leads us to the depressing conclusion that it is not just British business and expertise that is for sale in China – so is British government policy. [Source]

At The Conversation, the University of Bristol’s Jeffrey Henderson highlights safety, logistical, political, and security questions over the nuclear deal with China. One Osborne defender is The Telegraph’s Liam Halligan, who dismissed accusations of “kowtowing” as “nonsense,” and argued that the chancellor was right to concentrate on expanding Britain’s underperforming exports to China.